Clarksville, TN – For the final time this season, the Austin Peay State University (APSU) soccer team will take the field at home when they host a 2:00pm, Tuesday match against UT Martin at Morgan Brothers Soccer Field. 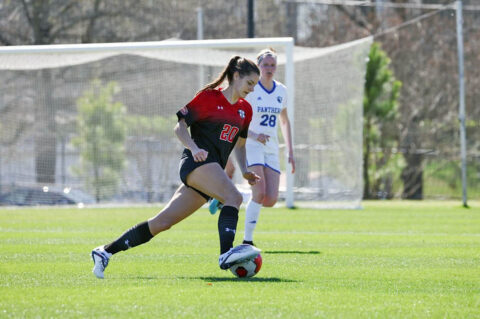 Austin Peay picked up its seventh point of the season when they played to a 1-1 draw against Eastern Illinois last time out.

With seven points this season, the Governors sit in ninth place in the OVC standings.

After a third-place finish in the 2019 regular season, UT Martin received two first-place votes and was picked to finish fourth by the OVC’s coaches and SIDs in the 2020 preseason poll. In his 11th season at the helm of UT Martin soccer, head coach Phil McNamara returns 2019 First-Team All-OVC defender Maria Castaldo and Second-Team All-OVC midfielder Bella Roberts.

Freshman Emely van der Vliet leads UT Martin in scoring this season with two goals and an assist. Junior Hendrikje Baurmann is the Skyhawks second-leading point scorer this season, she has yet to find the back of the net, but she has dished out three assists.

Senior goalkeeper Erica Myers has played every minute in net for UT Martin this season.  Myers was named the OVC Goalkeeper of the Week in the first week for the first week of the season and ranks second in the conference in goals against average (0.80). Myers also leads the OVC with two shutouts this season.

In last season’s meeting, UT Martin’s Hendrikje Baurmann scored goals in the 29th and 31st minutes to give the Skyhawks a 2-0 lead over Austin Peay State University. Peyton Powell [1] took over in net for the Governors at halftime and made three second-half saves to keep a clean sheet in the final 45 minutes. However, the Govs were unable to overcome the early pair of UT Martin goals and dropped a 2-0 decision at Morgan Brothers Soccer Field in Clarksville.

Prior to this season, Austin Peay State University returned a pair of goalkeepers who had yet to start a collegiate game; now Peyton Powell [1] (24 saves) and Chloé Dion (12 saves) are one of three pairs of teammates to have double-digit saves in the OVC this season.

With five points each this season, freshman Tori Case [3] and junior Rachel Bradberry [4] are tied for the Austin Peay State University team lead.

Tori Case [3] dished out her team-best third assist of the season against Eastern Illinois, she is tied for third in the OVC with three assists this season

Claire Larose [6] scored the 14th goal of her Austin Peay State University career against Eastern Kentucky, March 19th, and moved into a tie for seventh all-time in program history; she also ranks eighth all-time in points (35) and ninth in assists (7).

Rachel Bradberry’s [4] 100th-minute goal against EKU was the seventh goal of her Austin Peay State University career and it was her career’s first game-winning goal.

In Austin Peay State University’s first three matches of the season, three of the four freshmen on the roster scored the first goal of their collegiate career. Isabel Petre [7] and Hannah Wilson [8] scored in the 56th and 74th minutes, respectively, against Jacksonville State, and Tori Case [3] scored in the 64th minute at SIU Edwardsville.

Ashley Whittaker’s [9] double-overtime goal against Jacksonville State was the fourth goal of her APSU career and it was her first game-winning goal.

Austin Peay State University will strictly maintain social distancing measures at Morgan Brothers Soccer Field this season for the safety of fans, players, coaches, and staff. Individuals violating any of the above policies will be required to leave the facility.


Next Up For Austin Peay State University Soccer

The Austin Peay State University soccer team will wrap up the regular season when it travels to Morehead State for a 4:00pm, Friday match at Jayne Stadium. The OVC soccer regular season will come to a close on Tuesday, April 6th, which is when the Governors will have their built-in bye date on the schedule.