Clarksville, TN – In the final home match of the delayed 2020 regular season, the Austin Peay State University (APSU) soccer was unable to overcome a pair of late second-half goals by UT Martin and fell to the Skyhawks, 2-0, Tuesday at Morgan Brothers Soccer Field. 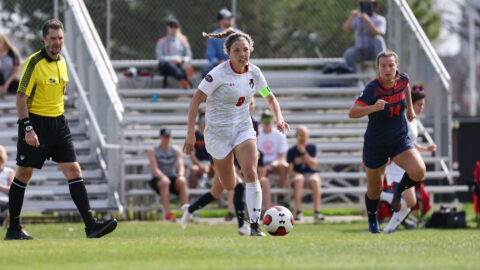 It was a measured start to the match for Austin Peay (2-6-1), with UT Martin (4-3-1) controlling offensive possession early in the contest.

The Shyhawks took the first half’s only shot on target in the fifth minute, but APSU goalkeeper Chloé Dion [1] was up to the task and made the save in her third start of the season.

UT Martin would take two more shots in the first half, but neither was on goal, as Dion and Skyhawks goalkeeper Erica Myers combined to keep a clean sheet in the first 45 minutes of the match.

Austin Peay State University took its only shot of the match in the 52nd minute, but Morgan Drawdy’s [2] ball missed wide right. In the 62nd minute, UT Martin scored the first tally of the match when Jill Hildreth sent in a cross that glanced off the hand of Dion, hit the far post, and found the back of the net.

Trailing 1-0, Dion made a pair of saves on Jaden Hilldreth shots in the 65th and 75th minutes to keep the Governors in the match. But in the 83rd minute, Jaden Hildreth found Emely van der Vliet, who snuck a shot just under the hard-charging Dion on a breakaway to give the Skyhawks a 2-0 advantage.

The APSU was unable to erase UT Martin’s two-goal advantage and the Governors dropped its first decision at Morgan Brothers Soccer Field since the season-opening match against Tennessee Tech.

The Austin Peay State University soccer team will wrap up the delayed 2020 season when it travels to Morehead State for a 4:00pm, Friday, match at Jayne Stadium in Morehead, Kentucky.