Brentwood, TN – After another perfect week with a singles win and a doubles win, the Austin Peay State University women’s tennis senior Fabienne Schmidt has been named the Co-Ohio Valley Conference Women’s Tennis Player of the Week for the second time this season, the league announced Wednesday. 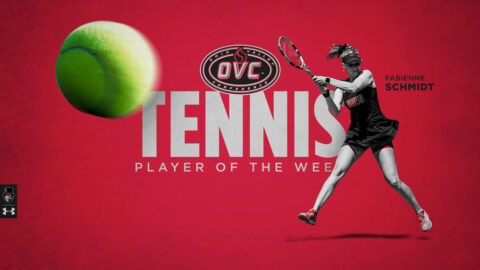 In singles action, Schmidt won her fifth-straight match of the season when she knocked off Jacksonville State’s Carolina Bulatovic (6-2, 4-6, 6-1) on Saturday. Schmidt leads the Governors with a 6-1 record in singles play this season while playing exclusively from the No. 1 position.

In doubles play, Schmidt has partnered with Danielle Morris and the duo is off to a perfect 7-0 start this season from the No. 1 position. Last week, Schmidt and Morris beat Jacksonville State’s Bulatovic and Malin Buechner (6-0) in the No. 1 doubles match without dropping a point.

This is the third time that Schmidt has been named the OVC Women’s Tennis Player of the week in her Austin Peay State University career, and it is the second time this season that she is sharing this OVC weekly accolade with Murray State’s Sara Loncarevic. Schmidt and Loncarevic are the only two OVC women’s tennis players to repeat as a player of the week this season, they were also named co-players of the week on March 10, 2021.

Schmidt and the rest of the Austin Peay State University women’s tennis team will be back in action this weekend when they play a 1:00pm, Friday match at Southeast Missouri, and noon, Saturday match at UT Martin. For news, match-time updates, and scores, be sure to check back at LetsGoPeay.com or follow the APSU Governors women’s tennis team on Twitter (@AustinPeayWTN).