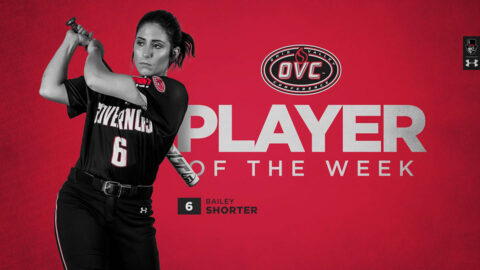 In picking up the accolade, Shorter becomes the 15th different APSU softball player to earn the conference’s top weekly award since the 1994 season.

The Evansville, Indiana native batted .538 overall in this past weekend’s sweep of Tennessee Tech, as the APSU Govs extended their current win streak to six games, recording at least two hits in each game from the lead-off spot, including four doubles and two home runs among her team-leading seven hits.

Shorter also led the team in RBIs (6) and runs scored (4) while posting a 1.308 slugging percentage and a .538 on-base percentage in the three games.

Shorter’s selection marks the 23rd time overall in the program’s history that an Austin Peay State University softball player has been selected OVC Player of the Week.