Nashville, TN – The Austin Peay State University (APSU) track and field got another excellent performance from Kenisha Phillips [1] as part of the proceedings at the Vanderbilt Black and Gold, which wrapped up Saturday afternoon on West End. 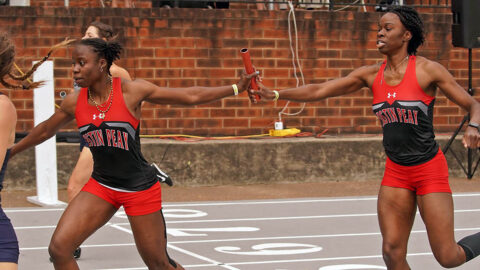 Phillips got things started Friday night with a win in the 200-meter dash, posting a 23.93 mark to dust the field by more than three-tenths of a second.

She followed that up with a runner-up finish in Saturday’s 100-meter dash, dueling Murray State’s Kenia Seals to the final step in a tight race that narrowly went the Racers way by less than five-hundredths of a second.

Kori McDaniel [2] once again posted a solid across-the-board showing. In Friday’s hammer throw, she secured a top-10 finish with a 45.52 meter toss to place 10th and took home a top-five finish in the shot put with a personal-best 13.71-meter toss that is the best by a Governor since 2012.

She was back at it Saturday with a sixth-place, 41.66 meter discus throw that just missed putting her on the all-time top-10 at Austin Peay State University for that event but was nonetheless yet another personal best in what has been an exemplary junior campaign.

In addition to McDaniel, Jackie Verseman [3] put together a pair of top-10 finishes for the weekend, first with a ninth-place, 12.26-meter shot put Friday night. She came back strong Saturday as well with a 10th-place, 37.45 meter discus throw.

“Our throwers have been a consistent presence for us every week,” APSU head coach Valerie Brown [4] said. “No matter what else is going on, that group has been a rock for us and this week was no different.”

Jessica Hoban [5] got the weekend off to a good start in the jumps with a sixth-place showing in the triple on Friday night; her 10.85 meter mark gave her sixth and narrowly missed a personal-best on her part. Jessica Kelley [6] took sixth in Saturday’s long jump thanks to a 5.24-meter leap which was her best outdoor attempt since the 2019 Ohio Valley Conference Championships.

While Kelley was doing her part in the long jump, Denia Hill-Tate [7] was taking home a share of sixth in the high jump with a 1.63 meter mark.

The APSU Govs wrapped the event with the 4×400-meter relay, and Austin Peay State University’s quartet of Phillips, Allana Johnson [8], Molly Howard [9], and Keleah Shell [10] closed the event with an eighth-place, 3:58.59 mark to close it out.


“This wasn’t our usual group but I thought they fought and battled,” Brown said. “We had to endure a lot this week; we wanted to really simulate a conference meet with a short week and quick turnaround. This will have us better prepared for what we’ll face at the conference meet.”

It marked the end of a strong event for Johnson and Howard as well—that duo put together season-bests, in the 200 and 400 for Johnson and the 800 and 1500 for Howard. Johnson is approaching career-bests in both events, while Howard’s 1500 mark was her best as a Gov.

Next Up For APSU Track and Field

The Austin Peay State University track and field team is back in action next week in Terre Haute, Indiana, for the Sycamore Open hosted by Indiana State.