Washington, D.C. – NASA’s Ingenuity Mars Helicopter has a new mission. Having proven that powered, controlled flight is possible on the Red Planet, the Ingenuity experiment will soon embark on a new operations demonstration phase, exploring how aerial scouting and other functions could benefit future exploration of Mars and other worlds.

This new phase will begin after the helicopter completes its next two flights. The decision to add an operations demonstration is a result of the Perseverance rover being ahead of schedule with the thorough checkout of all vehicle systems since its February 18th landing [1], and its science team choosing a nearby patch of crater bed for its first detailed explorations. 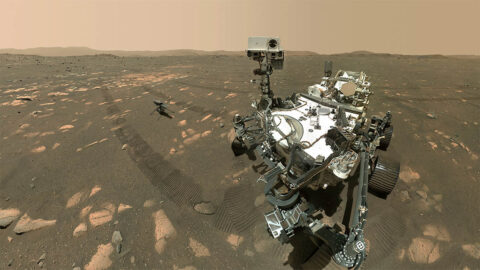 NASA’s Perseverance Mars rover took a selfie with the Ingenuity helicopter, seen here about 13 feet (3.9 meters) from the rover. This image was taken by the WASTON camera on the rover’s robotic arm on April 6th, 2021, the 46th Martian day, or sol, of the mission. (NASA/JPL-Caltech/MSSS)

With the Mars Helicopter’s energy, telecommunications, and in-flight navigation systems performing beyond expectation, an opportunity arose to allow the helicopter to continue exploring its capabilities with an operations demonstration, without significantly impacting rover scheduling.

“The Ingenuity technology demonstration has been a resounding success [2],” said Thomas Zurbuchen, associate administrator for NASA’s Science Mission Directorate. “Since Ingenuity remains in excellent health, we plan to use it to benefit future aerial platforms while prioritizing and moving forward with the Perseverance rover team’s near-term science goals.”

The operations demonstration will begin in about two weeks with the helicopter’s sixth flight. Until then, Ingenuity will be in a transitional phase that includes its fourth and fifth forays into Mars’ crimson skies.

Flight four will send the rotorcraft about 436 feet (133 meters) south to collect aerial imagery of a potential new landing zone before returning to land at Wright Brothers Field, the name for the Martian airfield on which Ingenuity’s first flight took place. This 873-foot (266-meter) roundtrip effort would surpass the range, speed, and duration marks achieved on the third flight.

Ingenuity was programmed to execute a fourth flight Friday, with a takeoff to take place at 9:46am CDT (7:46am PDT, 12:30pm local Mars time) and first data to be returned at 12:39pm CDT (10:39am PDT). The fifth flight would send Ingenuity on a one-way mission, landing at the new site. If Ingenuity remains healthy after those flights, the next phase can begin.

Ingenuity’s transition from conducting a technology demonstration to an operations demonstration brings with it a new flight envelope. Along with those one-way flights, there will be more precision maneuvering, greater use of its aerial-observation capabilities, and more risk overall.

The change also means Ingenuity will require less support from the Perseverance rover team, which is looking ahead for targets to take rock and sediment samples in search of ancient microscopic life. On April 26th – the mission’s 66th sol, or Martian day – Perseverance drove 33 feet (10 meters) with the goal to identify targets.


“With the short drive, we have already begun our move south toward a location the science team believes is worthy of investigation and our first sampling,” said Ken Farley, project scientist for the Perseverance rover from Caltech in Pasadena, California. “We’ll spend the next couple of hundred sols executing our first science campaign looking for interesting rock outcrop along this 2-kilometer (1.24-mile) patch of crater floor before likely heading north and then west toward Jezero Crater’s fossil river delta.”

With short drives expected for Perseverance in the near term, Ingenuity may execute flights that land near the rover’s current location or its next anticipated parking spot. The helicopter can use these opportunities to perform aerial observations of rover science targets, potential rover routes, and inaccessible features while also capturing stereo images for digital elevation maps. The lessons learned from these efforts will provide significant benefit to future mission planners. These scouting flights are a bonus and not a requirement for Perseverance to complete its science mission.

The cadence of flights during Ingenuity’s operations demonstration phase will slow from once every few days to about once every two or three weeks, and the forays will be scheduled to avoid interfering with Perseverance’s science operations. The team will assess flight operations after 30 sols and will complete flight operations no later than the end of August. That timing will allow the rover team time to wrap up its planned science activities and prepare for solar conjunction – the period in mid-October when Mars and Earth are on opposite sides of the Sun, blocking communications.

“We have so appreciated the support provided by the Perseverance rover team during our technology demonstration phase,” said MiMi Aung, project manager of Ingenuity at NASA’s Jet Propulsion Laboratory (JPL) in Southern California. “Now we have a chance to pay it forward, demonstrating for future robotic and even crewed missions the benefits of having a partner nearby that can provide a different perspective – one from the sky. We are going to take this opportunity and run with it – and fly with it.”

The Ingenuity Mars Helicopter was built by JPL, which also manages this technology demonstration project for NASA Headquarters. It is supported by NASA’s Science, Aeronautics, and Space Technology mission directorates.

At NASA Headquarters, Dave Lavery is the program executive for the Ingenuity Mars Helicopter. At JPL, MiMi Aung is the project manager and J. “Bob” Balaram is chief engineer.

For more information about Ingenuity:

A key objective for Perseverance’s mission on Mars is astrobiology [8], including the search for signs of ancient microbial life. The rover will characterize the planet’s geology and past climate, pave the way for human exploration of the Red Planet, and be the first mission to collect and cache Martian rock and regolith (broken rock and dust).

Subsequent NASA missions, in cooperation with ESA (European Space Agency), would send spacecraft to Mars to collect these sealed samples from the surface and return them to Earth for in-depth analysis.


The Mars 2020 Perseverance mission is part of NASA’s Moon to Mars exploration approach, which includes Artemis [10] missions to the Moon that will help prepare for human exploration of the Red Planet.

JPL, which is managed for NASA by Caltech in Pasadena, California, built and manages operations of the Perseverance rover.

For more about Perseverance: