Nashville, TN – The Nashville Sounds’ comeback attempt came to a halt when Toledo’s three-run homer in the bottom of the eighth inning proved to be the difference in a 9-6 loss Wednesday night at Fifth Third Field.

Nashville trailed 6-3 after four innings only to come back and tie the game in the eighth. The comeback went for naught when Toledo’s Zack Short drilled a tie-breaking three-run homer in the bottom of the eighth inning. The long ball came just moments after Nashville right-hander Luke Barker issued a pair of two-out walks. 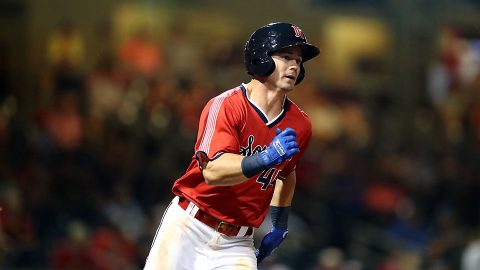 The Sounds went quietly in the ninth and have dropped their first two games of the season for the first time since they started 0-3 in 2012.

Nashville jumped out to an early lead much like they did Opening Night. Derek Fisher started it in the top of the first with an opposite-field double, Jace Peterson walked and Zach Green scored both with a double to the gap in right-center to give the Sounds a 2-0 lead.

But the lead didn’t last long as Toledo center fielder Derek Hill launched a three-run homer off Thomas Jankins in the bottom of the second to give the Mud Hens a 3-2 lead.

Green’s second run-scoring hit of the game made it a 3-3 game in the third, but Toledo’s offense kept coming. They scored a single tally in the third and a pair of runs in the fourth to grab a 6-3 lead. Jankins allowed six runs in 4.0 innings but didn’t factor into the decision.

Miguel Sanchez’s dynamic relief effort kept the Sounds in the game. The right-hander worked three scoreless innings and struck out three in the process.

The comeback attempt fired up when Chad Spanberger drilled a two-run homer in the seventh inning to pull the Sounds within a run. They tied it in the eighth when Corey Ray tripled, and Jamie Westbrook followed with an RBI single to left field to make it 6-6.

Game three of the six-game series is scheduled for Thursday night in Toledo. Left-hander Blaine Hardy starts for the Sounds against right-hander Logan Shore for the Mud Hens.

The Nashville Sounds are the Triple-A affiliate of the Milwaukee Brewers and play at First Horizon Park. Opening Day is scheduled for Tuesday, May 11th when the Sounds host the Memphis Redbirds at 6:35 p.m. For more ticket information, call 615.690.4487, or e-mail [2].