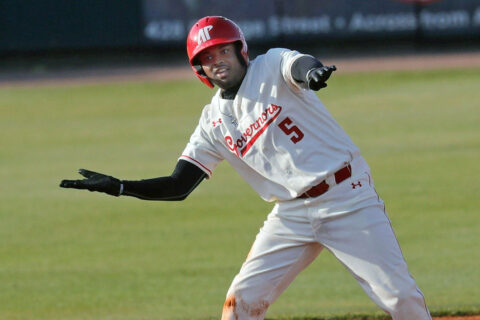 In the nightcap, Austin Peay State University (17-28, 12-11 OVC) returned the favor, scoring three runs in the final three innings to break a 4-4 tie en route to the victory.

Tipler had a hand in breaking the tie in the seventh inning. After right fielder Skyler Luna [2] singled, third baseman Gino Avros [3] followed with a walk.

Tipler then singled to right field to score Luna. The Panthers then tried to pick off Tipler at first base but the throw got past the first baseman and Avros scored, extending the lead to 6-4.

Luna would later add an insurance run in the top of the ninth with his first home run of the season, putting the Govs ahead 7-4. The extra insurance run proved useful as Eastern Illinois scored catcher Ryan Knernschield singled to score pinch hitter Chase Rademacher. The Panthers would put the tying run aboard, but reliever Harley Gollert [4] induced a game-ending double play to secure the win.

APSU starter Sebastian Martinez [5] (3-5) earned the win thanks to the late rally. He held the Panthers to four runs on four hits and five walks over 6.2 innings. Gollert notched his second save after allowing one run on three hits over the final two innings.

EIU reliever Alex Stevenson (3-4) took the loss after allowing four runs (two earned) on four hits over four innings. Knernschield’s 2-for-5 outing that included a RBI was the Panthers lone multi-hit outing in the game.