Nashville, TN – The Nashville Sounds tossed a shutout in game one and launched three home runs in game two on their way to sweeping a doubleheader against the Toledo Mud Hens at Fifth Third Field Friday night.

Nashville’s first win of the year was backed by a dominant pitching performance by a trio of left-handers – starter Aaron Ashby and relievers Quintin Torres-Costa and Clayton Andrews.

The 22-year-old Ashby made his Triple-A debut and worked four shutout innings. He limited the Mud Hens to just one hit and struck out six. Torres-Costa followed and kept Toledo off the board for 1 2/3 innings and Andrews finished the shutout with 1 1/3 innings. The trio combined for 12 strikeouts and Torres-Costa earned the win in relief. 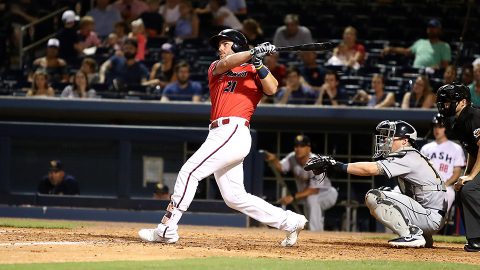 It was a balanced offensive attack for the Sounds in the game one win.

Run-scoring hits came from Dee Strange-Gordon, Dustin Peterson, Jace Peterson, and Corey Ray. Peterson’s was a two-run double in the top of the third to give Nashville a 4-0 lead and Ray’s was a solo blast down the right field line in the sixth to cap the scoring at 5-0.

Nashville picked up right where they left off in game one when Jace Peterson drilled a solo homer in the top of the second inning to give the Sounds an early 1-0 lead. Two batters later, Ray launched his second home run of the day, a solo smash to right-center to make it 2-0.

Game two starter Blaine Hardy did his part and went 3 1/3 innings. He limited Toledo to one run on two hits and struck out seven.

It was a 2-1 game in the top of the fifth when Zach Green gave the Sounds a cushion with a two-run homer to lift the lead to 4-1. It remained that way until Toledo scored three in the bottom of the fifth to even the game.

Three hits in the top of the sixth did the trick for the Sounds. Mario Feliciano and Ray started the frame with back-to-back single and Brent Diaz delivered the go-ahead base hit with a single to left field to give the Sounds a 5-4 lead they would hang on to.

Bubba Derby worked a scoreless sixth inning and Luke Barker followed suit with a 1-2-3 bottom of the seventh to notch his first save of the year.

Game five of the six-game series is scheduled for Saturday at 4:05pm central time. The Sounds have not announced a starter to go against Toledo right-hander Wily Peralta.


The Nashville Sounds are the Triple-A affiliate of the Milwaukee Brewers and play at First Horizon Park. Opening Day is scheduled for Tuesday, May 11th when the Sounds host the Memphis Redbirds at 6:35pm. For more ticket information, call 615.690.4487, or e-mail [2].