Charleston, IL – In a series defined by late game-winning rallies, the Austin Peay State University (APSU) baseball team scored four in the top of the ninth but Eastern Illinois took advantage of a late defensive miscue to score five runs to walk off with an 8-7 Ohio Valley Conference decision, Saturday, at Coaches Stadium. 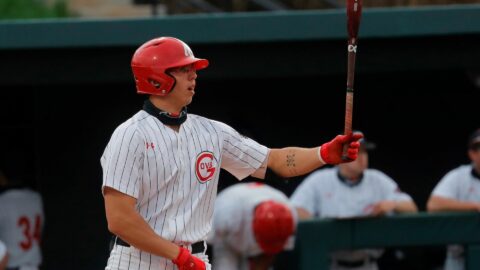 Still trailing 3-0 after six innings, the Governors leveled the score with a three-run seventh inning.

APSU loaded the bases with three straight singles to start the inning. Pinch hitter Reid Brown [2] then supplied the Govs first run with his infield single. A double play provided the second run and an Eastern Illinois error helped APSU tie the game.

The Governors seized the lead in the ninth thanks to first baseman Bobby Head’s [3] leadoff home run. They then extended the rally with a double, sacrifice fly, and two walks. Avros drove in a run with a single and center fielder Garrett Spain [4] earned a bases-loaded walk to give the Govs a 7-3 lead after the top of the ninth.

Eastern Illinois (23-21, 13-14 OVC) began its half of the ninth inning with back-to-back singles to force a Govs pitching change. Reliever Nolan O’Shoney [5] promptly struck out a batter and got a fly out for the second out of the frame. But second baseman Lucas Diluca singled to drive in a run. After an intentional walk, O’Shoney induced a ground ball but the APSU Govs infield misplayed the ball, extending the game and allowing two runs to score, slashing the APSU lead to 7-6.

Catcher Ryan Knernscheid then walked to load the bases again. Third baseman Dalton Doyle wasted no time, taking the first pitch he saw into right field for a single that scored two runs and secured the victory.

Avros, Head, and catcher Jack Alexander [7] each had two hits in the APSU eight-hit day.

EIU reliever Nick Laxner (2-1) benefitted from the late rally, winning after recording the final out in the top of the ninth. Starter Trevor Nicholson went seven innings, allowing three runs on five hits.

Doyle led the Panthers offense with a 2-for-5, two RBI outing. Right fielder Ryan Ignoffo went 1-for-5 with a three-run home run in the fifth inning that gave EIU the game’s first runs.

The Austin Peay State University baseball team returns back to Tennessee for the next four games. The Govs first meet Belmont in a 4:00pm, Tuesday contest at Rose Park in Nashville. APSU then returns to Raymond C. Hand Park for a pivotal three-game OVC series against Jacksonville State, Friday-Saturday.