Clarksville, TN – The Austin Peay State University (APSU) baseball team plays its final midweek game of the 2021 season when it meets Belmont in a 4:00pm Tuesday tilt at Rose Park in Nashville that will not count toward the Ohio Valley Conference standings. 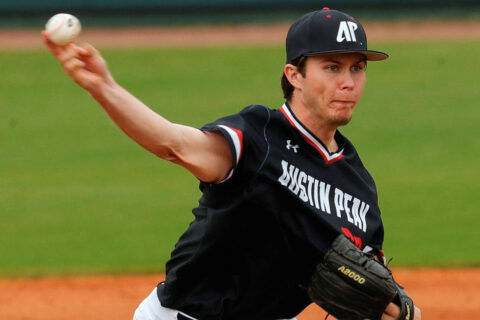 APSU looks to bounce back after seeing a potential OVC series victory at Eastern Illinois turned aside in the weekend’s final inning, Saturday.

Austin Peay State University has produced 47 runs over its last eight games (5.9 per game) but is 2-6 during that eight-game stretch.

Belmont returns home after dropping both games of a hastily scheduled doubleheader at Wake Forest, Sunday, which extended its losing streak to four games. The Bruins offense also is battling a rough stretch that has seen it score only 15 runs over seven games (2.1 per game) with only one victory.

Peyton Jula [1] (RHP) vs. Will Jenkins (RHP)
Jula is set to make his third-straight midweek start. In last week’s start against Bellarmine, he tossed three scoreless innings. Jula scattered three hits and struck out three for his first victory since a March 27 relief appearance against Belmont. He is 1-4 in his six starts this season with 18 strikeouts in 25.1 innings pitched.

Catcher Jack Alexander [2] saw three of his four base hits at Eastern Illinois go for extra bases, including his third home run of 2021. He has seven hits in his last six games (.292 BA).


Shortstop John Bolton [5] has seen his bat start to warm up with nine hits (.300 BA) and seven walks (.444 OBP) in his last nine games. He has three multi-hit games in that span.

Knaje Guthrie [6] has split time between left field and second base over the past seven games. He has three hits and three walks in his last 14 plate appearances (.429 OBP) dating back to April 30th.

Bobby Head [7] has started at all four infield positions and in right field this season. Currently, he has started the past eight games at first base in place of the injured John McDonald [8]. Head has a streak of four straight games with a hit and an RBI entering Tuesday’s game.

Matt Joslin [9] has been one of four starters at designated hitter since April 28th. He was 2-for-4 in a May 2nd start vs. Arkansas State, including a go-ahead RBI single in the sixth inning. Joslin was held without a hit in a May 8th starter at EIU.

First baseman John McDonald [8] enjoyed a 4-for-5, four RBI outing against North Alabama, April 27th, including a walk-off single in the ninth. However, he suffered a lower-body injury in that game and has missed the last eight games.

Outfielder Jeremy Wagner [14] has started seven of the APSU Govs last eight games and is batting .269 (7-26) with a three extra-base hits in those games.

After Tuesday’s game, the Austin Peay State University baseball team returns to Raymond C. Hand Park for its final home OVC series. The Govs host Jacksonville State in a matchup of two teams battling for the fourth, and final, spot in the OVC Baseball Championship. The three-game set is scheduled to start with a 6:00pm, Friday contest.