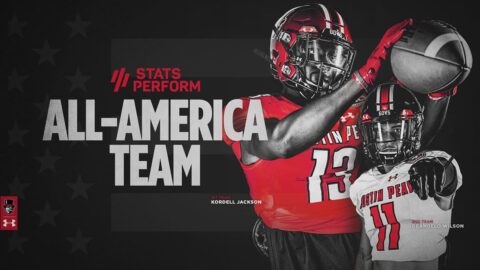 A consensus First Team All-America choice in 2019, Jackson did not see the ball thrown his way as much in 2020-21.

Instead, he wreaked havoc in the opposing offense’s backfields. Jackson led all OVC tacklers with 10.5 tackles for loss – seven of those coming in OVC play, where he also had five passes defended.

Jackson recorded a tackle for loss in seven of the Govs’ nine games, including two TFL at Pittsburgh in the fall and three TFL at Tennessee Tech to open the spring.

Wilson followed up a record-breaking 2019 campaign with 619 yards – sixth among FCS receivers – in a shortened and disjointed 2020-21 season. He did the bulk of his damage in OVC play, where he recorded 100 yards in four of the five games he played and averaged 112.4 yards per game with three touchdowns. Wilson also posted consecutive 10-reception games in the Govs’ upset wins against nationally-ranked Jacksonville State and Murray State to end the regular season.

In addition, quarterback Draylen Ellis finished tied for sixth in voting for the Jerry Rice Award, which recognizes the FCS’ top freshman player.