Nashville, TN – The Memphis Redbirds took advantage of 10 walks issued by Nashville pitching and came away with a 9-2 win in front of a sellout crowd of 10,612 at First Horizon Park Friday night. The sellout crowd was the 100th in ballpark history.

Memphis jumped on Sounds starter Wade LeBlanc immediately in the first inning with a single tally. Major damage was done in the third when the Redbirds plated four runs to bust the game open. Lars Nootbar delivered a three-run double and Dennis Ortega’s RBI single made it 5-0. Leblanc was lifted after 2 2/3 innings and was tagged with the loss. 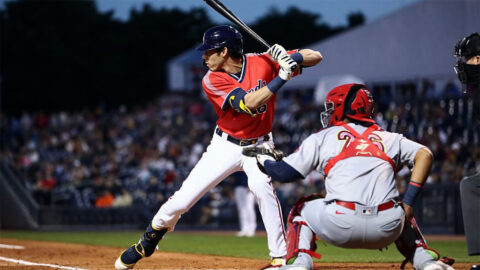 Christian Yelich joined Nashville on a Major League rehab assignment and played left field. He went 0-for-2 with a pair of strikeouts and made a planned exit after three innings.

Nashville’s Zach Green lifted the crowd to life with a two-run homer in the bottom of the sixth inning to trim the deficit to 5-2. It was Green’s team-leading fourth long ball of the season.

The momentum was short-lived, however, as Memphis came back with four runs in their half of the seventh to take a 9-2 lead. Reliever Patrick Weigel allowed all four runs in 1/3 of an inning.

It was the second time Nashville pitching issued 10 walks in the series against Memphis. They also issued 10 free passes in Wednesday’s 9-6 win.

Tonight’s attendance at First Horizon Park was 10,612. It is the 100th sellout in ballpark history.

Zach Green hit his team-leading fourth home run of the season, good for third-most in the Triple-A East.

Keston Hiura had two doubles tonight and has had a pair of doubles in two straight games.

Corey Ray went 3-for-3 with two singles and a double, his first three-hit game of the season.

The Nashville Sounds are the Triple-A affiliate of the Milwaukee Brewers and play at First Horizon Park. Single-game tickets are on sale now for all remaining 2021 home games. For more information call 615.690.4487 or e-mail [2]