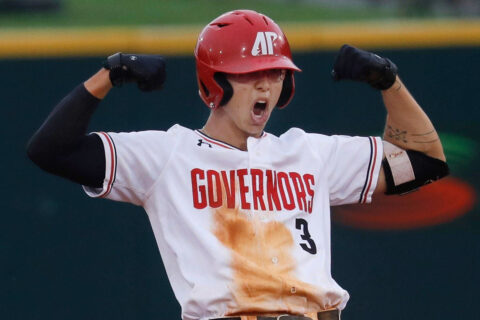 With the split, Austin Peay State University won the three-game series against Jacksonville State, 2-1. The Govs moved into a tie for fourth place with the Gamecocks. The top four teams at the end of next weekend’s play will qualify for the OVC Baseball Championship hosted by The Ballpark at Jackson in Jackson, Tennessee, May 27th-29th.

In the nightcap victory, Austin Peay State University (20-30) got out to a quick start thanks to center fielder Garrett Spain [2] who hammered a two-run home run deep to right field in the first inning. The Govs would add a run in the third with second baseman Malcolm Tipler [3] opening the inning with a single, moving to third on Head’s double, and scoring on a wild pitch.

APSU added to its lead with single runs again in both the fifth and seventh innings. Head doubled to start the fifth and scored on catcher Jack Alexander’s [4] one-out single. Head then did the heavy lifting himself in the seventh with a leadoff home run to left-center, extending the APSU lead to 5-0.

The Governors pitching staff kept the Gamecocks caged in Game 2. Starting pitcher Drew McIllwain [5] opened with 4.2 scoreless innings before turning it over to reliever Tucker Weaver [6] (3-0) who provided 1.2 scoreless innings and picked up the win.

Jacksonville State (24-25) would breakthrough in the eighth. After a pair of walks, shortstop Isaac Alexander drove in a run with a one-out single. The Gamecocks threatened to tie the game in the ninth, loading the bases with one out against APSU reliever Harley Gollert [7], who got a strikeout and a deep fly out to right to end the game.

Austin Peay State University got two runs in the second inning with some help from a Jacksonville State error. The APSU Govs would inch closer with single runs in the sixth and eighth innings as designated hitter John McDonald [8] drove in each of the runs as APSU closed within a run.

But Jacksonville State broke the game open thanks to a five-run ninth inning. All nine JSU batters got to the plate in the frame, but Alexander delivered the big blow with a three-run double that wrapped up the inning’s scoring.

Head went 3-for-4 in the opener and was 4-for-5 in the nightcap with two doubles and a home run to lead the APSU Govs 24-hit day. He finished the three-game series 11-for-14 (.786) with four doubles, two home runs, three RBI, and six runs scored.

Alexander led Jacksonville State with a 2-for-8, five RBI doubleheader performance. Crowe was 2-for-4 with two RBI in the opener but was held hitless in Game 2, walking twice.