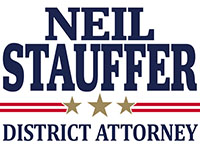 Clarksville, TN – On Monday, May 17th, 2021 Republican Neil Stauffer, the current Assistant City Attorney for the City of Clarksville, announced his candidacy for District Attorney of the 19th Judicial District, which includes Montgomery County and Robertson County.

Neil has dedicated his life to protecting and serving our communities. As a Soldier, Neil served on active duty for eight years in the United States Army Judge Advocate General’s Corps (JAG) where he prosecuted criminal cases and advised Commanders on a variety of legal issues.

As the senior prosecutor for the 101st Airborne Division (Air Assault), Neil led and trained a team of prosecutors and paralegals at one of the busiest criminal law offices in the Army, and he prosecuted the Division’s most complex, challenging, and high-profile cases.

During his time on active duty, Neil deployed twice overseas in support of Operation Iraqi Freedom and Operation New Dawn. Neil continues to serve as a Judge Advocate in the United States Army Reserve and currently holds the rank of Major.

After leaving active duty, Neil served as Assistant General Counsel with the Tennessee Department of Health where he litigated cases involving drug diversion and violations of practice standards pertaining to patient care. From that position, Neil joined the City Attorney’s Office in Clarksville, TN where he currently serves as Assistant City Attorney. There, Neil handles civil litigation and works closely with police officers, providing legal advice on constitutional matters and a variety of other law enforcement issues.

Neil and his wife, Tiffanie, reside in Clarksville, TN where Tiffanie works as a Physician Assistant (PA-C). They have three children: Luke, Ella, and Dean. Neil is an active member of the Clarksville Civitan, the Fraternal Order of Police Two Rivers Lodge 23, the Military Officers Association of America, and the American Legion CSM Gary W. Crisp Post 289.

Neil also serves as a Board Member of Clarksville-Montgomery County Crime Stoppers. He is a member of the Leadership Clarksville Class of 2021 and serves as an Elder at Grace Lutheran Church.

Neil earned his B.A. from the University of North Carolina at Chapel Hill and his J.D. from the Regent University School of Law.


“As Montgomery and Robertson Counties continue to grow, we need a District Attorney who will lead with strength. Under my leadership, the District Attorney’s Office will be active in the community to educate residents on ways to prevent and reduce crime.”

“We will fight to protect victims and ensure their voices are heard. We will seek justice in every case, while enforcing the law equally, fairly, and consistently. As your next District Attorney, I’ll put my leadership and experience to work for you to keep our community safe.”

If you would like more information about this topic, please email the campaign at info@neilstauffer.com