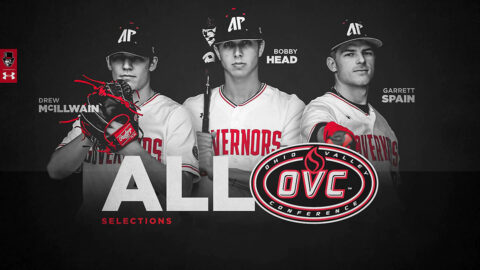 Spain, of Clarksville, made the move up to First Team All-OVC this season after earning OVC Freshman of the Year, Second Team All-OVC and OVC All-Freshman Team honors in 2019.

He closed the regular season strong – batting .359 with 14 RBI over the final 19 games. The regular season-ending push boosted his batting average to .323 and he led the APSU Govs with 41 RBI and 14 stolen bases.

Head, of Winter Garden, Florida, was a true utility player during the 2021 season. He started the year at shortstop and eventually started at all four infield positions, right field, and designated hitter. Head finished the regular season batting .304 with eight home runs and 36 RBI. In league play, he posted a .355 batting average with six home runs and 24 RBI.

The Austin Peay State University offensive leader in three different series, Head set a program record with 11 hits in a three-game series against Jacksonville State – his .786 batting average also helping him win OVC Player of the Week honors. He also led the Governors in series against Tennessee Tech and Eastern Kentucky.

McIllwain, of Waverly, earned OVC All-Freshman honors as the list of nominees included freshmen and redshirt freshmen from both the 2019 and 2020 seasons. He earned his first taste of weekend starter duties in back-to-back starts against Eastern Kentucky and Morehead State. McIllwain impressed in his first collegiate start by holding EKU to one run over 6.1 innings while striking out seven in a game the Govs eventually won.

After a brief stint out of the weekend rotation, McIllwain became a permanent fixture as the APSU Govs No. 3 starter against SIUE. In his return to the rotation, he held the Cougars to one run over 6.0 innings, striking out a career-high eight batters en route to his first win as a starter. He finished OVC play with a 3.65 ERA that was sixth among league pitchers and he limited OVC foes to a .236 batting average – eighth among league pitchers.