Columbus, OH – The Nashville Sounds launched a season-high six home runs on Friday night, including two from Weston Wilson and back-to-back jacks from Tyrone Taylor and Jake Hager, to beat the Columbus Clippers 13-9 on a windy night at Huntington Park. The Sounds have won 10 consecutive games and 13 of their last 15. 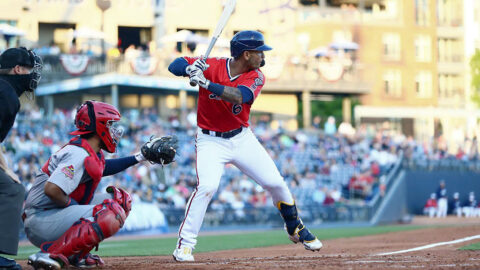 Taylor and Hager hit their back-to-back shots in the third, and the Sounds (16-5) led 7-0. Taylor has homered in each of his first two games with the Sounds.

The Clippers (8-13) got all nine of their runs in a wild bottom of the third inning, sending 13 batters to the plate against Jesus Castillo, Quintin Torres-Costa and Luke Barker.

Columbus only had three hits in the frame but took advantage of six walks and a pair of Sounds errors for a 9-7 game after three. But the Sounds never allowed another run, and the Clippers only had a baserunner in one other inning the entire game.

After Dustin Peterson scored on a double play in the fifth to pull the Sounds within one, Tim Lopes belted a three-run homer to center in the sixth to make it 11-9.

Then Wilson poked an opposite-field two-run shot in the ninth for the 13-9 final. Barker, Bobby Wahl, Jake Cousins, Miguel Sanchez and Hoby Milner combined for 6 2/3 scoreless relief innings, with Wahl notching the win and Milner posting his fourth save.

The Nashville Sounds are the Triple-A affiliate of the Milwaukee Brewers and play at First Horizon Park. Single-game tickets are on sale now for all remaining 2021 home games. For more information call 615.690.4487 or e-mail [2].