Clarksville, TN – Connor Crawford [1], who has coached collegiately the past three seasons, joins the Austin Peay State University (APSU) volleyball coaching staff as an assistant coach. His hiring follows the departure of Chandler Wellmann [2] in January. 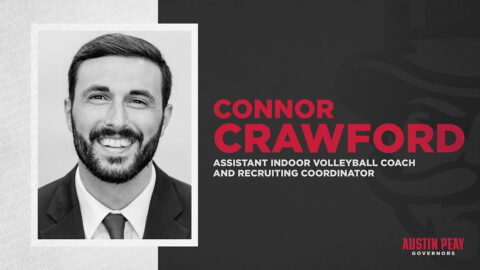 He worked with the Railsplitters’ hitters and blockers as they played a condensed 10-match schedule this spring.

“We are excited to have Connor joining our staff,” said Taylor Mott [3], Austin Peay State University head volleyball head coach. “We strive to hire coaches that will have a positive impact on our program and athletes. We believed from the beginning of our search Connor was someone who could do exactly that.”

“I met Travis last year and talked to Coach Mott and she reminds me a lot of Allison from LMU so I believe we’re going to get along well as a coaching staff,” said Crawford. “I’m looking forward to jumping into recruiting; it’s my favorite part about coaching college level. I’m hoping to help bring in some good kids, help make the ones we have better, and build some positive relationships.”

Prior to his time in Harrogate, Crawford was a member of the University of the Cumberlands women’s volleyball coaching staff. As the Patriots graduate assistant coach, he helped the Patriots post a 22-13 record in 2018 followed by a 17-13 mark in 2019. In two seasons, Crawford worked with four All-Mid-South Conference selections, six Daktronics NAIA Scholar-Athletes, and 14 MSC Academic All-Conference recipients.

Following his graduation from Bryan College in 2016, he remained with his alma mater as a volunteer assistant coach with the women’s volleyball team. He then was a head coach for the Horizon Volleyball Club in his hometown for four seasons before joining the University of the Cumberlands staff.

Crawford played three seasons with the Bryan men’s volleyball club team and completed his bachelor’s degree in mathematics. He then earned a master’s degree in health and human performance at the University of the Cumberlands in 2020.