Nashville, TN – The Nashville Sounds got a solid outing from Blaine Hardy and home runs from Dustin Peterson, Weston Wilson, and Cooper Hummel in a 6-4 win over the Charlotte Knights at Truist Field on Tuesday night. The win for Nashville was the club’s 13th consecutive win.

Coming off back-to-back six-game sweeps of Gwinnett and Columbus, the Sounds opened the six-game set in Charlotte with a first-inning run. Pablo Reyes doubled to the left-field corner on the first pitch of the game and came around to score on Dustin Peterson’s sacrifice fly. 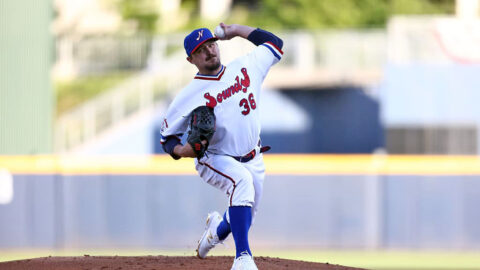 After Luis Gonzalez gave the Knights a 2-1 lead with a two-run homer in the bottom of the second, the Sounds used three home runs in the top of the fourth to grab the lead for good.

Peterson started the inning with his third long ball of the season, a solo blast to even the game at 2-2. With two outs in the frame, Weston Wilson drilled a long home run to left field to give the Sounds a 3-2 lead. Following Corey Ray’s infield single, Cooper Hummel drilled an opposite-field two-run blast to make it a 5-2 game.

Ray’s infield single-ended with him leaving the game with an apparent leg injury. He was replaced by Dylan Cozens. Dustin Peterson also left the game in the ninth after getting hit by a pitch in the hand.

Hardy worked five innings and allowed two runs on three hits in the winning effort. The southpaw improved to 2-0 on the season. Relievers Quintin Torres-Costa worked the sixth and into the seventh, Jake Cousins finished the seventh and Patrick Weigel got the job done in the eighth to keep it at 5-2.

Nashville got an insurance run in the top of the ninth before Charlotte made things interesting in the bottom half. Matt Reynolds brought Charlotte within a pair of runs at 6-4 with a two-run double off R.J. Alvarez.

Luke Barker was summoned with one out and retired the next two batters to earn his second save of the season.

The Nashville Sounds are the Triple-A affiliate of the Milwaukee Brewers and play at First Horizon Park. Single-game tickets are on sale now for all remaining 2021 home games. For more information call 615.690.4487 or e-mail [2].