Charlotte, NC – Bowden Francis gave the Nashville Sounds five strong innings in his second Triple-A starter, but it was not enough as the Sounds fell 4-0 against the Charlotte Knights on Saturday night at Truist Field. After winning 15 games in a row, the Sounds have suffered consecutive losses for the first time since May 4-5 when they began the season 0-2.

Francis (1-1) gave up a homer in the second to Tim Beckham and a two-out RBI single in the third to Jake Burger, and that was it over five frames. He struck out six and finished his outing by retiring seven batters in a row in the eventual loss. 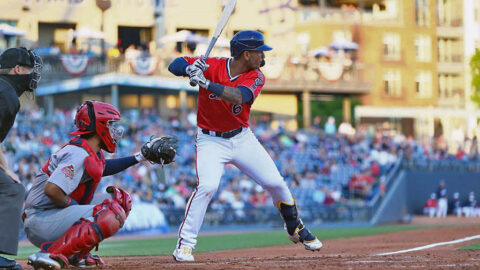 After Miguel Sanchez delivered two scoreless relief innings, Jake Cousins got touched for a two-run homer in the eighth by Luis Gonzalez for a 4-0 final.

The Sounds, who averaged seven runs per game during the long win streak, now have been shut out in consecutive games for the first since July 23rd-24th, 2017. Weston Wilson’s first-inning double was their lone extra-base hit, and they were 0-for-7 with runners in scoring position. Jonathan Stiever (2-1) got the win for Charlotte with six innings of work.

The Nashville Sounds are the Triple-A affiliate of the Milwaukee Brewers and play at First Horizon Park. Single-game tickets are on sale now for all remaining 2021 home games. For more information call 615.690.4487 or e-mail [1].