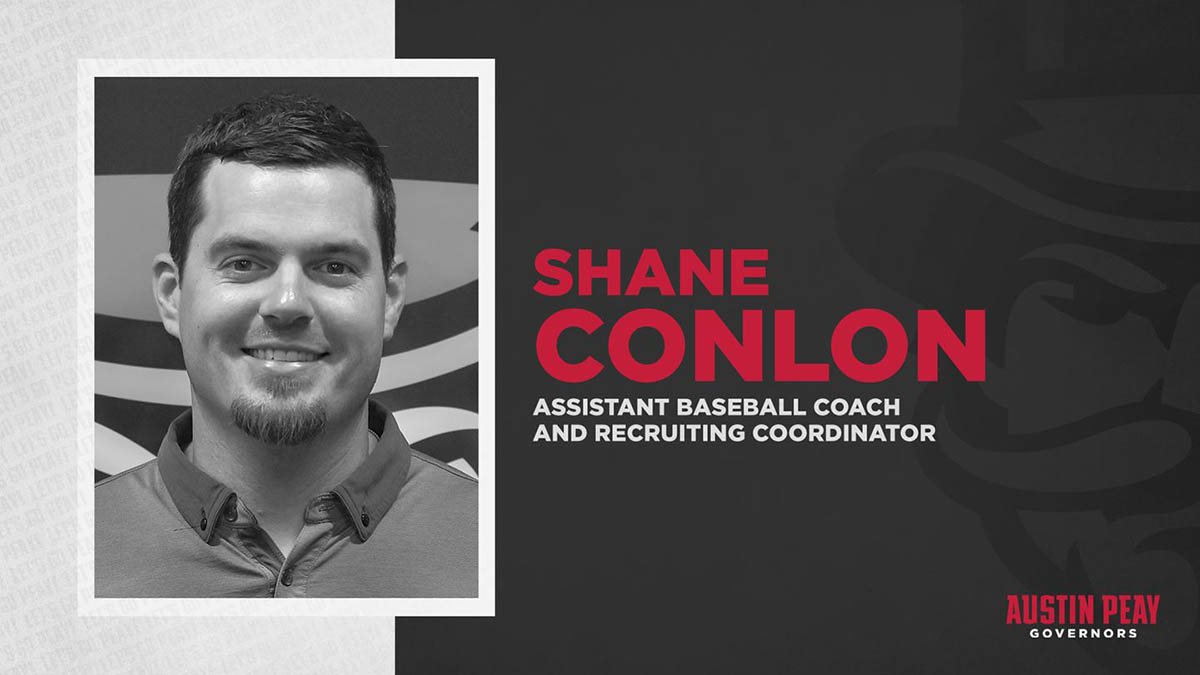 An assistant coach at Morehead State for the past two seasons, Conlon takes over for David Weber, who was named head coach at Hopkinsville High School in June. 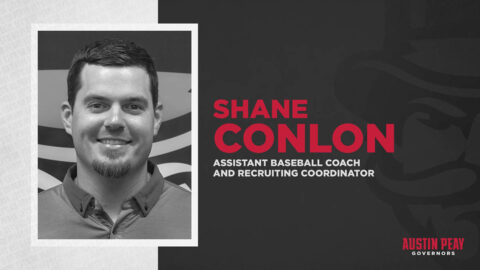 “I am excited Shane is joining our coaching staff,” said Janssen. “He will be joining us to lead the recruiting efforts, help coach the hitters, and work with the outfielders specifically. Shane is a proven winner as a player, helping Kansas State to some of that program’s finest years, including a super regional appearance and a Big 12 Conference championship. I am excited to welcome Shane and his wife Kim to Clarksville.

“In his young career, Shane has been around some of the finest coaches in college baseball.  He embodies what coaching is all about – caring for the players off the field and working hard to ensure that they improve their talents as players – and he has an infectious personality that our guys will be drawn to and will enjoy being around daily.  Shane has the kind of work ethic and tenacity that it takes to make a mark in college athletics. On top of those qualities, he has experience in the OVC, so he knows the landscape of college baseball in our league. I can’t wait for our guys to get to work with him.”

“Kim and I are excited to join the Austin Peay family,” said Conlon. “We’d like to thank coach Janssen, Director of Athletics (Gerald) Harrison, and President (Michael) Licari for this opportunity. We are looking forward to our opportunity at Austin Peay and in Clarksville.”

In his two seasons at Morehead, Conlon helped the Eagles to 24 wins and an Ohio Valley Conference tournament berth. MSU was ranked 38th nationally in home runs per game (1.28, 60 total home runs) and 58th in slugging percentage (.455) with only 16 of their 47 games at Allen Field. Freshman first baseman Jackson Feltner led the OVC with a .390 batting average and ranked second in slugging percentage (.652) en route to All-OVC and Collegiate Baseball Freshman All-America honors.

Before his time in Morehead, Conlon spent four seasons as an assistant at Kansas State. He aided the program to a winning record in 2017, the Wildcats first since 2013, and which included victories against nationally-ranked South Carolina and Texas Tech. Two seasons later, the Wildcats earned their first Big 12 tournament appearance since 2016, with the offense hitting 54 home runs – the highest single-season total since 2009.

A Naperville, Illinois native, Conlon began his collegiate career as a two-way player, pitching and playing first base for the Wildcats. He finished his career with a .300 batting average and was the 18th KSU hitter to record 200 career hits, finishing with 207 hits. Conlon enjoyed a stellar redshirt sophomore campaign in 2013, batting .341 with seven home runs and 28 RBI. He helped Kansas State win both the Big 12 regular-season and tournament titles season, host and win the Manhattan Regional, and reach the Super Regional round for the first time in program history.

Following his successful 2013 campaign, the Kansas City Royals selected Conlon in the 21st round of the MLB First-Year Player Draft, but he elected to return to Manhattan. Following his collegiate career, the Oakland A’s selected him in the 34th round of the 2015 MLB Draft. He played one season with the A’s Arizona Rookie League affiliate, batting .327 with 18 RBI in 30 games.

“I want to thank David Weber for his four seasons with Austin Peay baseball,” said Janssen. “He was a big part of this program and part of some cherished moments. David was dependable, cared for the players, and was a guy whose loyalty and integrity could never be questioned.  We are sad to see him go, but excited for him as he transitions to a new chapter.”

What They’re Saying About Conlon:

“I truly believe Shane is a rising star in college baseball. Congrats to Travis for this quality addition to his staff. Shane is extremely intelligent, a tireless worker, and he brings much-needed integrity to our profession. His ability to connect with student-athletes makes him a phenomenal recruiter and on-field teacher. More importantly, Shane and his wife Kim will be such great additions to Austin Peay baseball family and Clarksville community.” – Pete Hughes, Kansas State head baseball coach.

“Shane is a great hire for Austin Peay. His baseball background is deep, and he really is a rising star in the game. He will be a tremendous addition to the Travis’ staff.” – John Szefc, Virginia Tech head baseball coach.

“Shane has a dynamic personality and communicates with his players at a very high level. He has tremendous knowledge and instincts for the game in every way. I believe Shane will be a star in the coaching world in the years to come.” – Mitch Gaspard, Louisiana Tech assistant baseball coach and form Alabama head baseball coach.

“Shane is one of the smartest and most dedicated players I’ve ever coached. It was clear he was going to be a great coach in the two years I coached him. Shane is a relentless competitor who has used hard work and determination to succeed both as a player and coach. It’s a tremendous hire for Travis and Austin Peay.” – Mike Clement, Ole Miss assistant baseball coach.