HomeNewsWith School Traffic Back, AAA ask Drivers to be Cautious on the...
News

With School Traffic Back, AAA ask Drivers to be Cautious on the Roads

Nashville, TN – Tennessee roads are about to get more crowded as millions of students and teachers return to school. AAA is launching its “School’s Open Drive Carefully” campaign, reminding drivers to slow down, eliminate distractions, and obey traffic laws when passing bus stops and driving through neighborhoods and school zones.

This message is especially important this year as back-to-school traffic mixes with commuters who may have not shared the road with school buses or child pedestrians in more than a year.

“Drivers should have a heightened sense of awareness from the moment they leave the driveway,” said Megan Cooper, spokeswoman,  AAA – The Auto Club Group.

“Students will be walking or pedaling throughout neighborhoods and alongside city streets, making their way to-and-from school or the bus stop. Many of them might not be looking for you, so make sure you’re looking for them,” Cooper stated.

Drivers can expect an increase in:

According to a recent AAA survey of Tennesseans:

Residents admit to doing the following risky driving behaviors at least once in the past 3 months:


School zones are areas with extremely high vehicle, bicycle, and pedestrian traffic. Children on bicycles can be unpredictable and can make sudden changes in direction.

When driving through a school zone, lower your speed and increase your awareness, to ensure you can respond to any potential hazards on the roadway. Remember, in Tennessee it is illegal to use your handheld mobile device while driving through an active school zone.

“Driving around a school bus while its red lights are flashing is extremely dangerous,” Cooper continued. “Oftentimes the reason people illegally pass school buses is because they are in a hurry. Please allow yourself extra time on the road, so you are not tempted to take unnecessary risks on the road that endanger the lives of children.”

Motorists are required to stop when approaching a school bus that is stopped with its red lights flashing and STOP arms extended. There is only one exception, which is explained below. 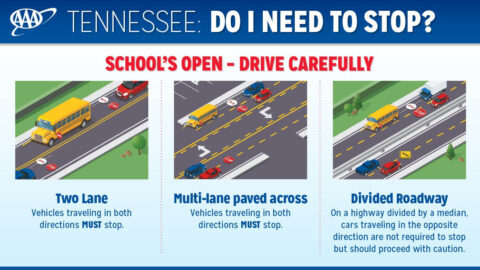 Safety Tips for Students at the Bus Stop

Children should arrive at the bus stop at least 5 minutes before the bus is scheduled to arrive. Parents should teach them to play it SAFE:

AAA – The Auto Club Group, through their School’s Open Drive Carefully campaign, are reminding motorists to:


About the AAA Consumer Pulse™ Survey

The AAA Consumer Pulse™ Survey was conducted online among residents living in Tennessee from June 16-25, 2021.  A total of 400 residents completed the survey.  Survey results asked of all respondents have a maximum margin of error of ± 4.9% points.  Responses are weighted by age and gender to ensure reliable and accurate representation of the adult population (18+) in Tennessee.