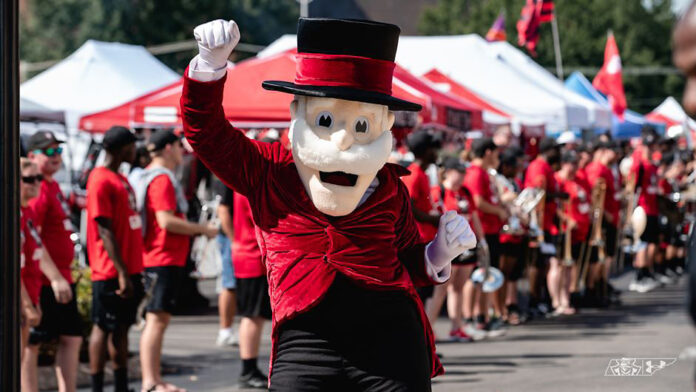 Clarksville, TN – From a celebration of the new era of Austin Peay State University (APSU) athletics, to electric gameday experiences, tailgating, vendors galore, and much more, there is no better to be than in Stacheville this weekend!

ASUN Celebration sponsored by Shelby’s Trio and the Maynard Family

Two weeks ago, Austin Peay State University made headlines when it announced that it is joining the ASUN Conference… now, it’s time to celebrate!

The celebration will be located on Browning Drive between the Morgan University Center and the Browning Building and will have food trucks such as Golly G’s and Pops & Dogs!

Located on the green lawn outside of Morgan Brothers Soccer Field, enjoy some of the best barbeque and fish fry Nashville has to offer with Smokin’ Joe’s providing food from 4:30pm–6:30pm.

It wouldn’t be an Austin Peay State University Football gameday without the Chick-fil-A Wilma Rudolph Stache Street. Taking over Marion Street from the Foy Center to Henry Street, the area will provide fans the opportunity to enjoy an array of food truck options, activities, and more in a family-friendly environment!

The Stache Street festivities also feature Clarksville native DJ Snacks who will be playing music leading up to kickoff against the Tigers!


Austin Peay State University campus police will begin closing parking along Marion Street between the Foy Center crosswalk and Henry Street Friday night. At 5:00pm fans will be able to walk along Stache Street and enjoy it until 30 minutes prior to kickoff (6:30pm). At approximately 7:00pm, Marion Street will reopen to traffic.

For the 10th season, Austin Peay State University athletics presents Tailgate Alley in Lot 6 (Foy Lot). Limited single-game spaces are available for $20.00 per game and season-ticket members will have access to purchase a season-long tailgating pass for the price of $75.00 per spot.

Fans will be able to take their reserved spots in Tailgate Alley at 3:00pm. Beginning at 5:30pm, Austin Peay State University campus police will close the lot to further parking for the day.

Before you make your voice heard during the football game, make sure you are registered to make it heard in the voting booth. Located on Tailgate Alley from 4:00pm-7:00pm this Saturday, you can register to vote at the Austin Peay State University Voter Registration Tailgate!

On Saturday, Austin Peay State University will retire a trio of jerseys starting with Isabel Canedo-Reagan’s #6 being retired before the 11:00am volleyball match. At the football game, Bob Bible’s #46 and Jay Bailey’s #44 will be retired and the two will be honored on the field between the first and second quarters.

Coming off a home and conference-opening sweep over reigning Ohio Valley Conference champion Morehead State Eagles, the Austin Peay State University volleyball team continues its homestand with a pair of matches against SIU Edwardsvile this Friday and Saturday.


The Govs and Cougars entered the 2021 season ranked in the top four of the OVC’s Predicted Order of Finish, with APSU finishing just above the Cougars at third. The matches feature two Preseason All-OVC selections in APSU’s Brooke Moore and SIUE’s Savannah Christian. Moore enters the weekend 5th all-time in kills (1,347) and 10th in digs (1,383).

Friday’s match against SIUE will begin at 6:00pm, while Saturday’s tips off at 11:00am.

After cheering on the volleyball team, perusing down Stache Street, and celebrating on Tailgate Alley all afternoon, cap off an eventful Saturday afternoon with the Govs at the Austin Peay–Tennessee State football game!

The Govs host the Tigers in the 24th meeting between the two programs and the first since NFL Hall of Famer Eddie George took over as head coach of Tennessee State. Kickoff against the Tigers is at 7:00pm at Fortera Stadium.

Austin Peay State University Athletics is committed to the health and safety of all fans, athletes, and staff. While masks are not required outdoors, they are recommended. Austin Peay’s COVID-19 Coronavirus protocols are available online.