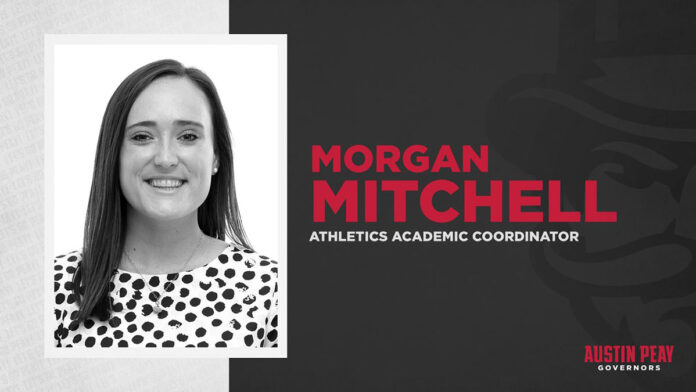 “I am excited for Morgan to join our staff,” said Katie Ethridge, Associate Director of Athletics for Student-Athlete Success. “Her experience as a former student-athlete and roles in athletic academic advising at Stephen F. Austin and Tennessee makes her a valuable asset to our department. She brings an energy and passion to the position that will truly benefit our student-athletes.”

“I am thrilled to be working with Student-Athlete Support Services at Austin Peay,” said Mitchell. “Katie and Riley (Plenge) are two of the best in the country at what they do and it is an honor to be working alongside both of them as an Academic Coordinator with the Governors football team. I am excited to be a part of the Austin Peay athletics family and get to work with our student-athletes.”

Mitchell joins the Austin Peay State University staff after working with the Lumberjacks football team last spring. She was responsible for SFA’s objective-based student hall, weekly academic meetings, communication with the coaching staff, and documenting all aspects of the student-athlete experience. Mitchell was part of a Lumberjacks team that helped navigate the football program out of NCAA penalties and improved their overall eligibility rate.

Prior to her season with Stephen F. Austin, Mitchell was an assistant academic coordinator on the Tennessee athletics staff. She worked with the Volunteers’ football, women’s basketball, men’s tennis, softball, and cross country and track field programs. She worked with those team’s student-athletes in one-on-one weekly meetings assisting with study skills, note-taking strategies, and other academic skills.

Mitchell (neé MacGilvary), who recently married Chad Mitchell, earned both her bachelor’s and master’s degrees from Mercer University. She earned her bachelor’s degree in marketing in December 2017 followed by a Master of Business Administration in July 2019. While working toward her master’s degree, she was a student-athlete support specialist in the Mercer athletics program and was an academic counselor for the Bears’ men and women’s tennis programs while assisting with the football program.