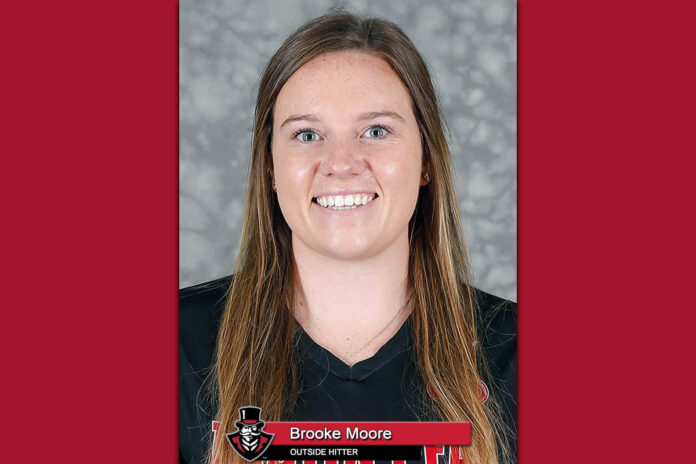 Brentwood, TN – Austin Peay State University (APSU) graduate student Brooke Moore led the Governors to a pair of three-set victories over the weekend and was named the Ohio Valley Conference’s Offensive Player of the Week, Monday.

The Louisville native finished with 37 kills (6.17/set) at an impressive .417 attack percentage in the Govs weekend sweep of SIU Edwardsville.

In the first match against the Cougars, Moore had an 11-kill first set, with her fourth kill of the night moving the veteran outside hitter to fourth all-time in program history in career kills. She finished the match with a season-high 22 kills and had seven digs.

The next day, Moore recorded 15 kills and 12 digs to tally her ninth double-double and her season’s second-best attack percentage at .433.

In addition to Moore rising to fourth all-time in kills, she also sits eighth in career service aces (124) and 10th in digs (1,402). She leads the team in all three statistical categories this season.

It is Moore’s third career Offensive Player of the Week award and first since October 21st, 2019 when she had 29 kills and a .542 attack percentage against Tennessee State and Belmont.

Austin Peay State University is on the road for three matches this weekend, beginning with a 5:00pm CT, Tuesday, match at Bellarmine followed by a two-match Ohio Valley Conference series at Tennessee Tech, Friday-Saturday, October 8th-9th. The APSU Govs and Golden Eagles are tied atop the OVC standings after two weeks with a perfect 4-0 record in conference play.