After Southeast Missouri took a 24-23 lead to bring up the first set point of the night, a Redhawks’ error followed by Claire Darland’s second kill forced SEMO to take a timeout. The two OVC rivals exchanged the next 18 points before Caroline Waite’s service ace gave the Govs the win in a first set that featured 26 ties and five lead changes.

Austin Peay State University’s 35 first-set points are the second-most points scored in a single set in program history, trailing only a 43-point effort against Murray State in 2011. 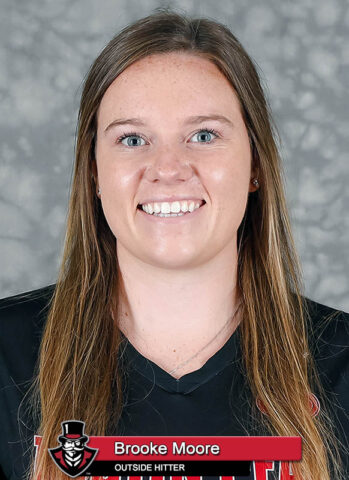 With their backs against the wall, Moore led APSU with five kills in the fourth frame as the Govs capitalized on 10 Redhawks’ errors and held them to a match-low .136 hitting percentage.

Despite forcing the fifth set, a 9-2 run by the Redhawks proved to be the deciding factor in Thursday’s match, as SEMO won their fifth-straight match against over APSU courtesy of a 15-9 victory.

Austin Peay State University’s 113 points through five sets tied for the third-highest mark in program history, while Moore’s 20-kill, 20-dig night was the second time she has accomplished that feat in her career and the 17th time it has been done by a Gov since 1998.

Austin Peay State University led 21-19 following Mikayla Powell’s third kill of the afternoon, but little did either team know it would be the largest advantage by either side through the next 28 combined points. Two-straight points by the Redhawks tied the score – for the 14th time in the set – at 21 and forced head coach Taylor Mott to call her first timeout. Later in the set, Claire Darland’s second kill gave APSU a 25-24 advantage and brought up the first of 10 set points. The two opponents traded the next 18 points before Maggie Keenan gave the Govs a 34-33 lead and a Caroline Waite service ace gave the Govs the victory.

Southeast Missouri jumped out to a 5-1 lead in the second set before a 6-1 Austin Peay run tied the score at seven with [5-1 and 1-6 isn’t a tie] Jaida Clark’s kill giving Austin Peay the advantage. Following the media timeout, the Redhawks went on a 7-2 run to take their largest lead of the set at 21-16 and force the Govs to call their second timeout. Despite a valiant comeback effort that saw the Govs trim the deficit to two four times, a 3-1 run by SEMO tied the match at one following a 25-22 second-set victory by the host.

In a similar fashion to the first set, the third featured five lead changes and 11 ties. After a Redhawks’ attack error put the Govs up 20-18, SEMO took the lead following a 7-2 run.

After Austin Peay State University led 11-5 early in the first set, Southeast Missouri went on a 10-2 run to take 1 15-13. The two teams continued to battle until three-straight Redhawks’ points brought up an APSU timeout. The Govs came out hot following the timeout, taking five of the next six points and holding off a late comeback by SEMO to force the match-deciding fifth set.