Nashville, TN – This week the Tennessee Titans make their first appearance at SoFi Stadium (capacity 71,500) as they travel to take on the Los Angeles Rams on Sunday Night Football. Kickoff is scheduled for 5:20pm PST/7:20pm CST on Sunday, November 7th.

The game features two teams with a combined three losses. The Titans, winners of four consecutive games, are 6-2 and in first place in the AFC South. The Rams are 7-1, tied with the Arizona Cardinals for the best record in the NFC West. They currently reside in second place due to Arizona’s head-to-head advantage.

The last time the Titans franchise played a game in Los Angeles was October 30th, 1994, when the then-Oilers played the Los Angeles Raiders at the L.A. Coliseum.

The Oilers’ last trip to play the Rams in Los Angeles was November 4th, 1990. From 1995 to 2015, the Rams played in St. Louis before moving back to Southern California in 2016. SoFi Stadium, which also houses the Los Angeles Chargers, was christened in 2020.

Fans can livestream the broadcast on their mobile devices from the Titans Mobile App (iOS and Android), as well as on desktop computers and mobile web at TennesseeTitans.com. Restrictions apply. For information and more streaming options visit TennesseeTitans.com or NFL.com/ways-to-watch.

Additionally, Westwood One Sports will broadcast the game to a national radio audience. Play-by-play announcer Ryan Radtke and analyst Ryan Leaf will have the call.

The Titans visited Indianapolis last week and needed overtime to pull out a 34-31 victory over the Colts (3-5) and extend their lead in the division standings. The Colts are three games back in second place, followed by the Jacksonville Jaguars (1-6) and the Houston Texans (1-7).

In the final two minutes of the fourth quarter, rookie cornerback Elijah Molden gave the Titans a seven-point lead with an interception return for a touchdown. However, the Colts scored with 22 seconds remaining to knot the score at 31-31 and force overtime. In the extra period, Titans safety Kevin Byard recorded his fourth interception of the season to put the offense in place for the game-winning, 44-yard field goal by Randy Bullock.


Quarterback Ryan Tannehill helped lead the team back from an early 14-0 deficit. He completed three touchdown passes, highlighted by a 57-yarder to wide receiver A.J. Brown. Tannehill was credited with his NFL-leading 12th game-winning drive since joining the Titans in 2019, while Brown set a new career-high with 155 receiving yards on 10 catches (tied career-high). 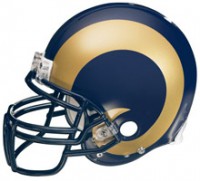 The Rams are in their fifth season under head coach Sean McVay. In 2020, they went 10-6 to earn their third playoff berth with McVay at the helm. He has led them to a pair of NFC West titles and an appearance in Super Bowl LIII following the 2018 campaign.

During the offseason, the Rams acquired veteran quarterback Matthew Stafford in a trade with the Detroit Lions. Now in his 13th NFL season, Stafford is the NFL’s second-leading passer in 2021 in both yards (2,477) and touchdowns (22).

The Rams are led defensively by defensive tackle Aaron Donald, a seven-time Pro Bowler and three-time Associated Press NFL Defensive Player of the Year. Donald has five sacks through eight weeks in 2021.