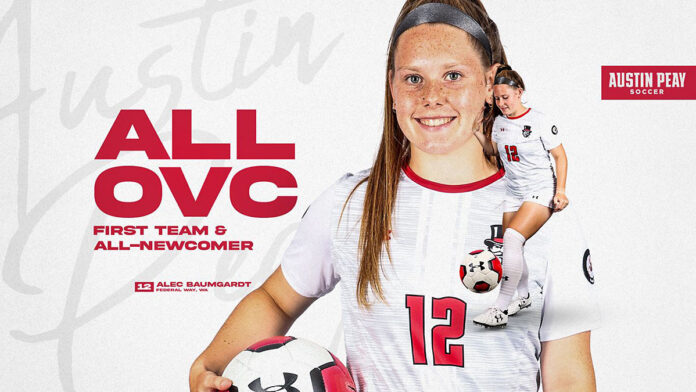 “Alec is a quality, well-balanced soccer player,” said assistant coach Tracy Hoza. “She has exceptional technical ability. Her vision and decision on and off the ball is what makes her and her teammates cook great. She loves being around the soccer ball and is always finding ways to be better. We are very proud of her.”

Baumgardt was one of five APSU Governors to play in all 17 matches this season and started all but one contest. The Federal Way, Washington native led the Govs with three goals, three assists in her debut season, with two goals and one assist coming in OVC action. Baumgardt also led Austin Peay State University with a pair of game-winning goals, including the game-winner in the 13th minute of the Govs only OVC win against Eastern Illinois. 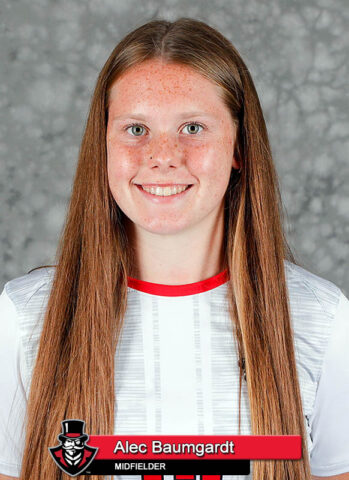 With ten points, Baumgardt finished the season tied for tenth in the OVC in scoring and was tied with UT Martin’s Makayla Robinson and Murray State’s Morgan Bodker for the most points among OVC freshmen. Baumgardt also finished tied for eighth in the league with three assists and ranked second among OVC freshmen with Belmont’s Leah Firsdon, trailing only SIU Edwardsville’s Sidney Christopher.

Austin Peay State University’s freshman from the Evergreen State is one of two freshmen to be named a First Team All-OVC selection this season, joining UT Martin’s Parker Gelinas, who was named the OVC Freshman of the Year.