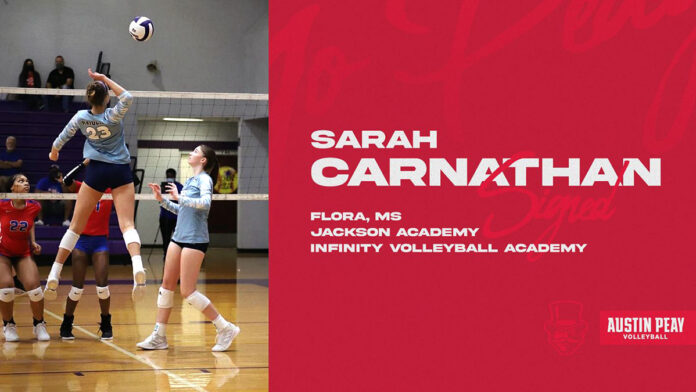 The Lady Raiders did not drop a set in MAIS competition during their 2021 title run, posting a perfect 14-0 record in district play and the second-most wins in a season in program history with 38. Carnathan has been named to the All-MAIS volleyball team each year at Jackson Academy and has been named an American Volleyball Coaches Association (AVCA) All-American selection three times during her prep career.

A multi-sport athlete, Carnathan was a state track and field champion for Jackson Academy, taking home an individual title with a 5-2 high jump in May. She also holds JA’s school record in the high jump with a 5-5 mark.

“Sarah Carnathan is an athlete,” Mott said. “She plays at a high level, is a hard worker and will be able to contribute right away for us. Sarah has good ball control and plays for a great volleyball club in Infinity Volleyball in Jackson, Mississippi and gets great training from Jenny Hazelwood who is the old volleyball coach at Mississippi.”