Clarksville, TN – For the fourth-straight game, the Austin Peay State University (APSU) women’s basketball team never trailed, as the Governors put together one of the best defensive performances in program history and held UT Southern to just 35 points – the second-fewest points allowed in the modern era of program history – in a 74-35 win, Tuesday, in the Winfield Dunn Center.

Austin Peay (7-3) had three players score in double-figures, with Yamia Johnson and Karle Pace leading with way with 17 and 15 points, respectively. Lyric Cole was the third Gov in double-figures, the freshman from Memphis posted her second-career double-double with 14 points and 11 rebounds.

The Govs got on the scoreboard first for the fourth-straight game, taking a lead that UT Southern would not match or take at any point in the contest when Pace drilled a three-pointer at the 8:56 mark in the opening quarter.

Coming off the bench, Johnson got the next bucket for the Governors, knocking down her first of a season-high four three-pointers to push the lead to 6-0 with 7:21 left in the quarter.

After a pair of Taylor McNairy free throws got the FireHawks on the scoreboard, Johnson connected on her second-straight three-pointer from the same corner of the court to put the Govs ahead, 9-2, with 5:41 left in the first quarter. Austin Peay State University’s early three-point barrage continued following UT Southern’s first field goal of the contest, with Pace burying her second triple to push the lead to 12-4 with 4:12 left on the clock.


After converting a layup to stretch the lead to 10 points for the first time, Johnson hit her third triple of the day – from the same corner of the court – to give the Governors a 17-6 lead with just under three minutes remaining in the quarter.

With the lead at 11 points and 34 seconds remaining in the opening quarter, freshman Kaiden Glenn knocked down the first three-pointer of her Austin Peay career to stretch the lead to 22-8, but UT Southern’s Takiyah Goff scored two of her team-high 12 points at the buzzer to cut the lead to 22-10 after ten minutes of basketball.

To start the second quarter, Austin Peay went on a 19-0 run that spanned 8:19 seconds. Pace scored the first four points of the run before Cole scored her first points of the game to push the lead to 28-10 with 8:11 left before halftime.

Leading by 19 points, Liz Gibbs pushed the lead above 20 points for the first time in the game when she scored four-straight points to give the Governors a 33-10 advantage at the 5:16 mark in the second quarter. Johnson followed Gibbs’ four points with her fourth three-pointer of the day before another Gibbs’ layup stretched the lead to 28 points with 3:50 left in the half.

Freshman Lamiah Walker capped off the 19-0 run by giving Austin Peay its first 30-point lead of the day, knocking down a jumper to make the score 41-10 with 2:00 left before the half. UT Southern was able to get on the board and halt the run with a pair of free throws before Keonna Chumbley connected on the FireHawk’s only field goal of the quarter with 1:26 left on the clock, but Cole closed the opening half with a second-chance layup and the Governors led 43-14 at halftime.

After UT Southern opened the second quarter on a 4-0 run, a Kasey Kidwell three-pointer and a fast-break layup for Pace put the Govs back ahead by 30 points, 48-18, with 8:17 left in the quarter. The Firehawks had their best offensive quarter in the third quarter, but the Governors still held UT Southern to just 13 points in the frame and led 61-27 at the start of the fourth quarter.

Austin Peay built its biggest lead of the afternoon in the fourth quarter, with Pace knocking down another triple to stretch the advantage to 37 points before a Johnson free throw and layup put the Govs ahead by 40 points, 69-29, for the first time with 6:56 left to play.

After a UT Southern basket, Glenn pushed the advantage back to 40 points before Walker gave Austin Peay a 41-point advantage – its biggest lead of the day – when she knocked down a free throw with 5:08 on the clock.

The Govs scored just once more in the contest, with Cole converting a layup to push the lead back to 41 points, 74-33, with 1:13 remaining, but UT Southern scored the final points of the contest and Austin Peay State University cruised to a 39-point victory and extended its winning streak to four games.

The second quarter. Austin Peay State University was in control the entire game, but the defense held the FireHawks scoreless for the first 8:19 of the quarter while the offense scored 19 unanswered points. APSU built a 31-point advantage with the second-quarter opening 19-0 run and never looked back.

Austin Peay State University held UT Southern to just 35 points, which is the second-fewest points allowed in a single game in the modern era of the program. The 1976-77 team holds the record for the fewest points allowed, having held Milligan to 29 points in an 88-29 win on December 15th, 1976.

The Governors have picked up four-straight wire-to-wire wins and have not trailed since they fell to Tulsa, November 27th, at the FAU Thanksgiving Tournament.

Austin Peay State University connected on 10 three-pointers, improving to a perfect 3-0 this season when they make double-digit triples.

The Governors matched their season-high with 52 rebounds. Before grabbing 52 boards in the season opener against Evansville, November 9th, 52 rebounds was the best single-game total since the Govs pulled down 54 rebounds against Brescia (12/6/14).

Reigning OVC Player of the Week Yamia Johnson led the Governors with 17 points, she has scored in double-figures in all 10 games to begin her Austin Peay State University career.

Johnson is the first Governor to score in double-figures in 10-straight games since 2019, when Keisha Gregory did it in 11-consecutive games from January 31st to March 7th.

Johnson connected on a season-high four three-pointers, her best single-game performance since she hit four triples in her final game for Jacksonville State against Tennessee Tech (3/4/21).

Karle Pace scored 15 points; she has scored in double-figures in nine of the first ten games to begin her APSU career.

Freshman Lyric Cole posted her second double-double of the season with 14 points and 11 rebounds, she is the first Governor with multiple double-doubles in a single season since Arielle Gonzalez-Varner recorded five during the 2019-20 season.

Cole matched her career-high with 11 boards, she has led the APSU Govs on the glass a team-best seven times this season.

Ella Sawyer led the Governors with four assists, but Pace, Nina De Leon Negron, and Liz Gibbs all dished out three assists in the contest.

Sawyer has now led the Govs in assists five times this season.

The Austin Peay State University women’s basketball team will kick off Ohio Valley Conference action on December 30th when it welcomes UT Martin to the Dunn Center. The tip-off is at 5:00pm.

The Governors then hit the road for a January 1st contest against Southeast Missouri at the Show Me Center in Cape Girardeau, Missouri. The tip-off is set for 2:00pm. 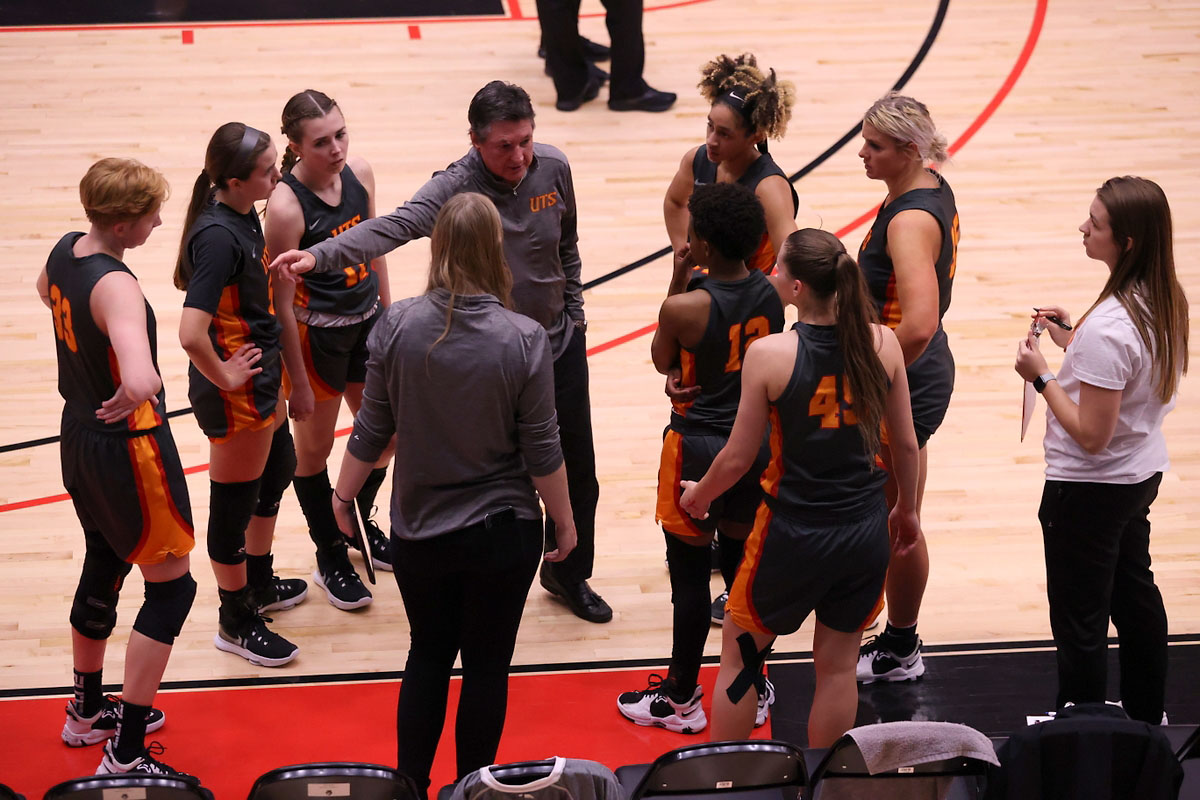 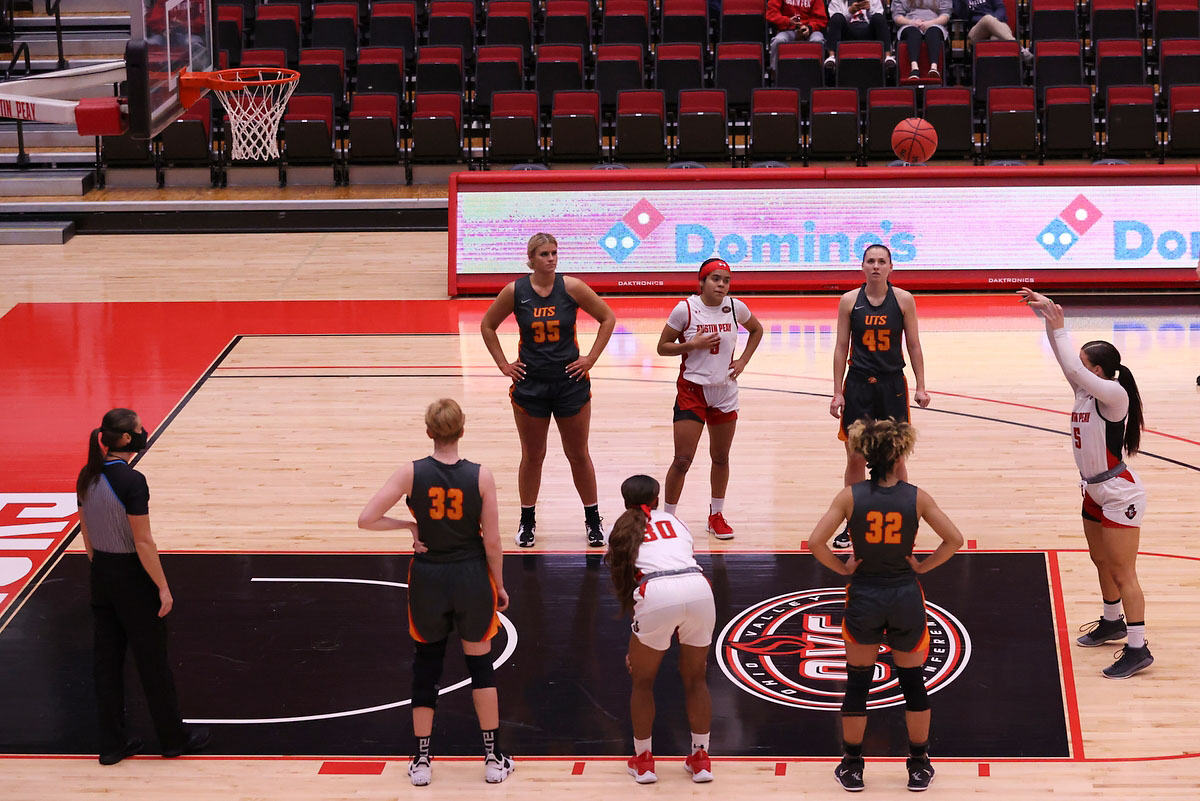 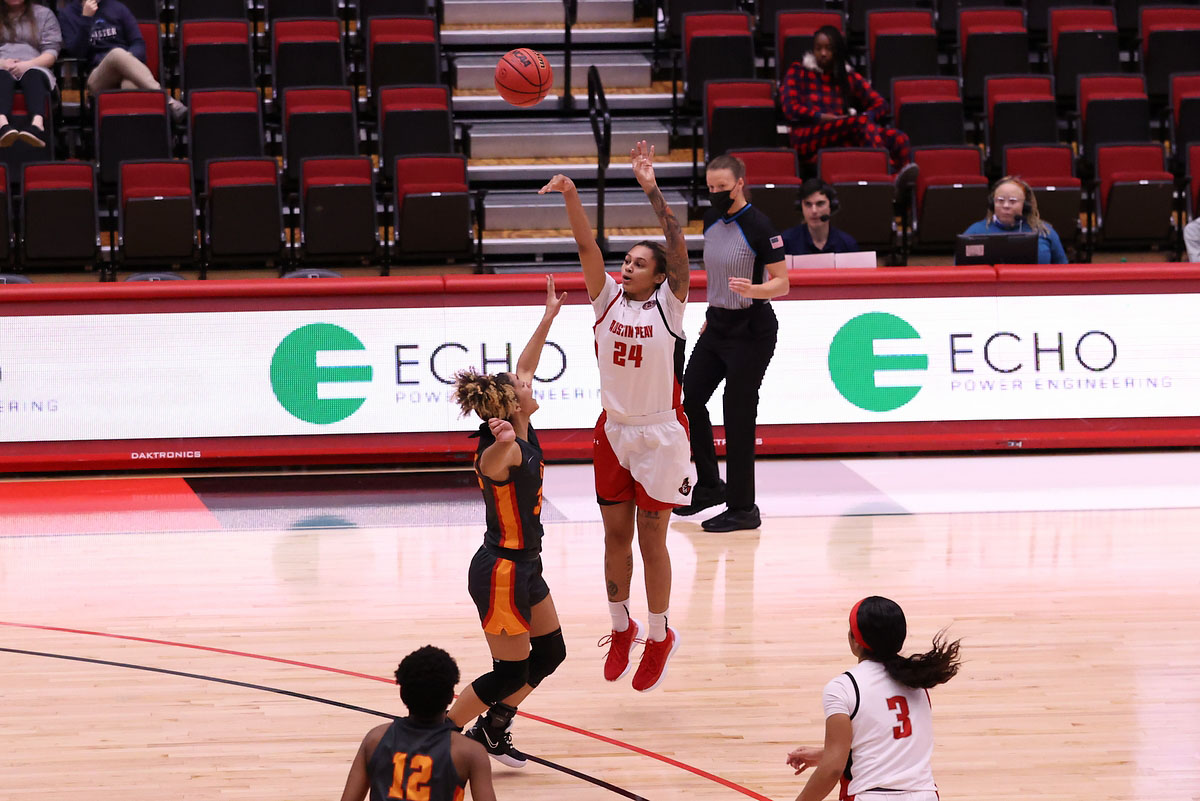 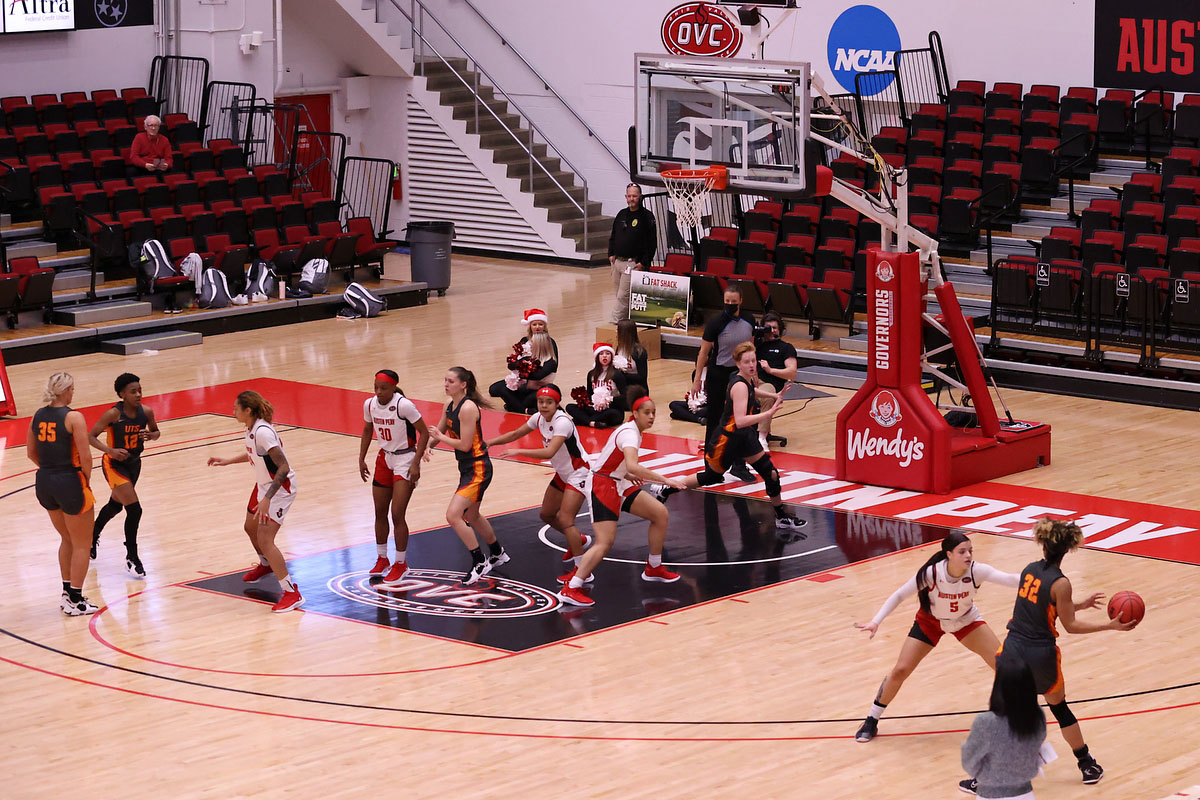 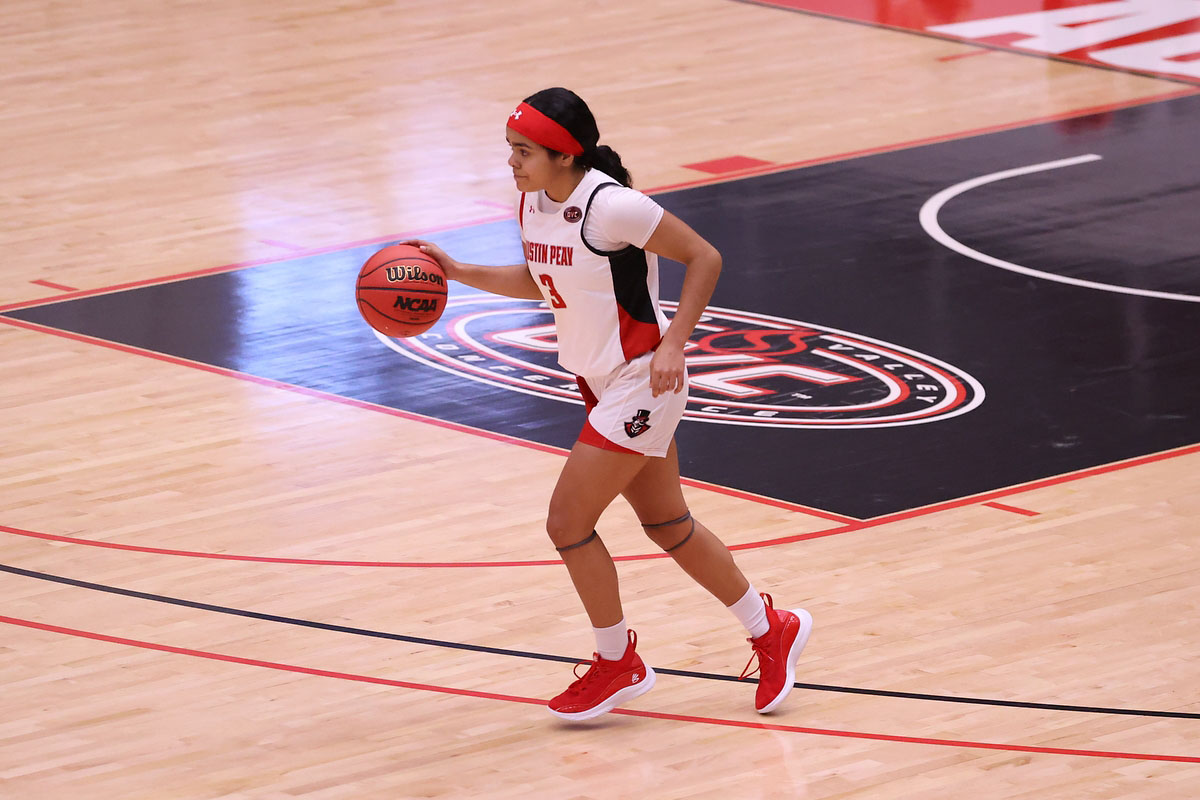 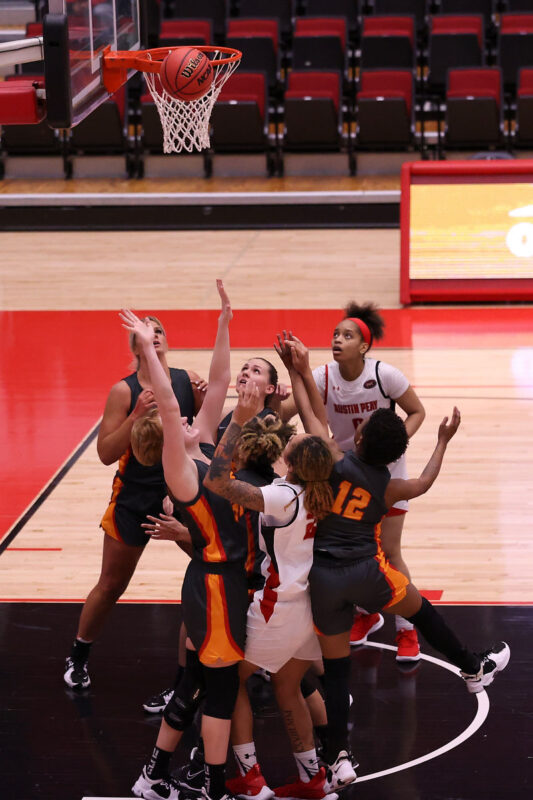 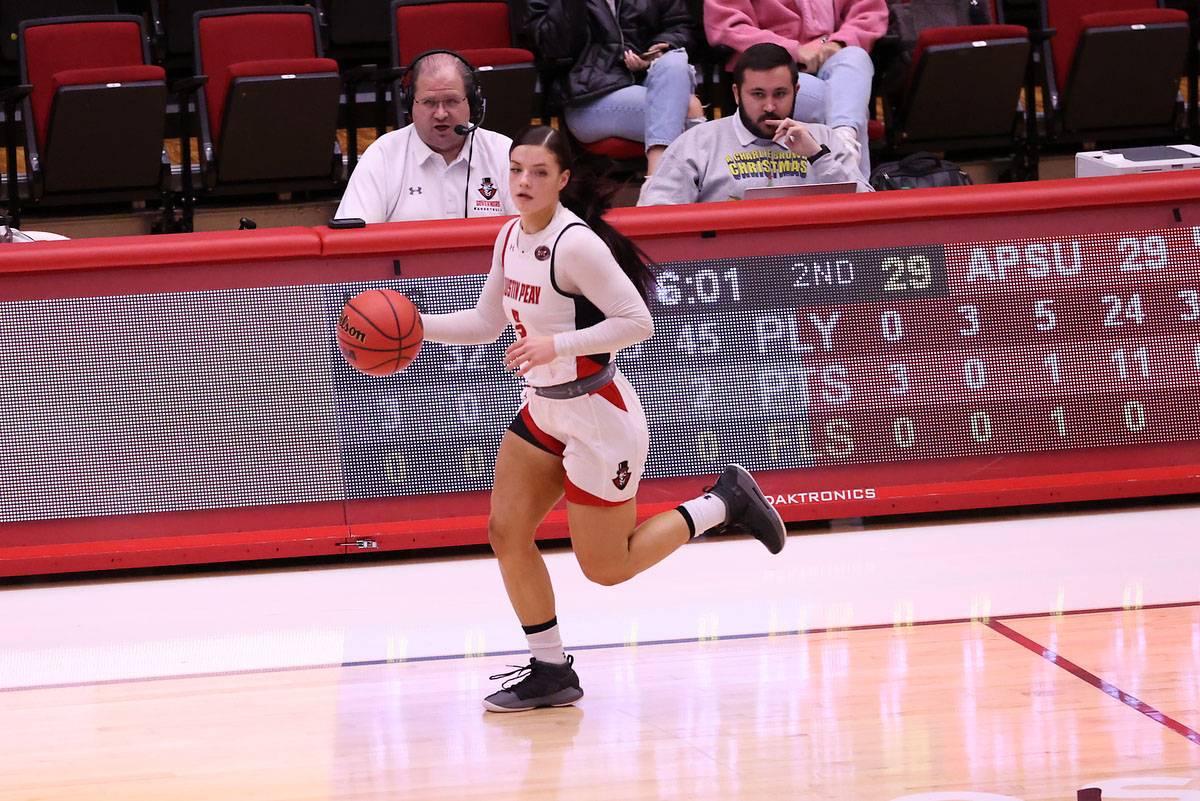 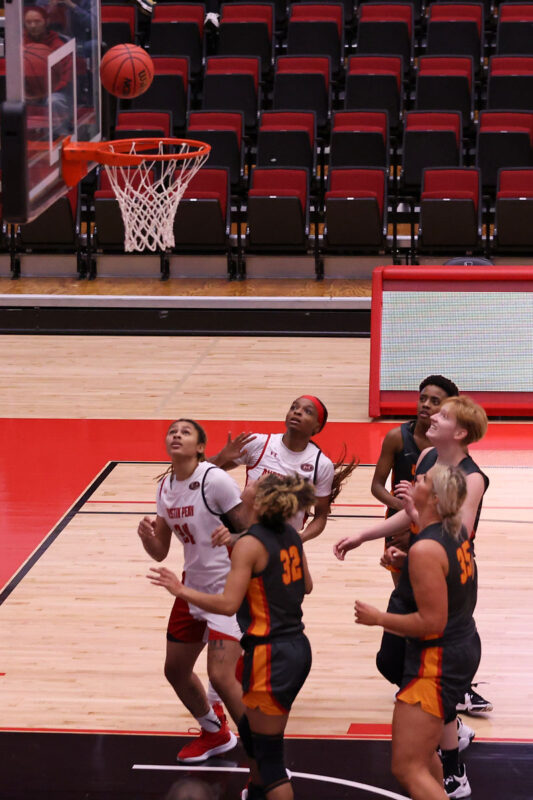 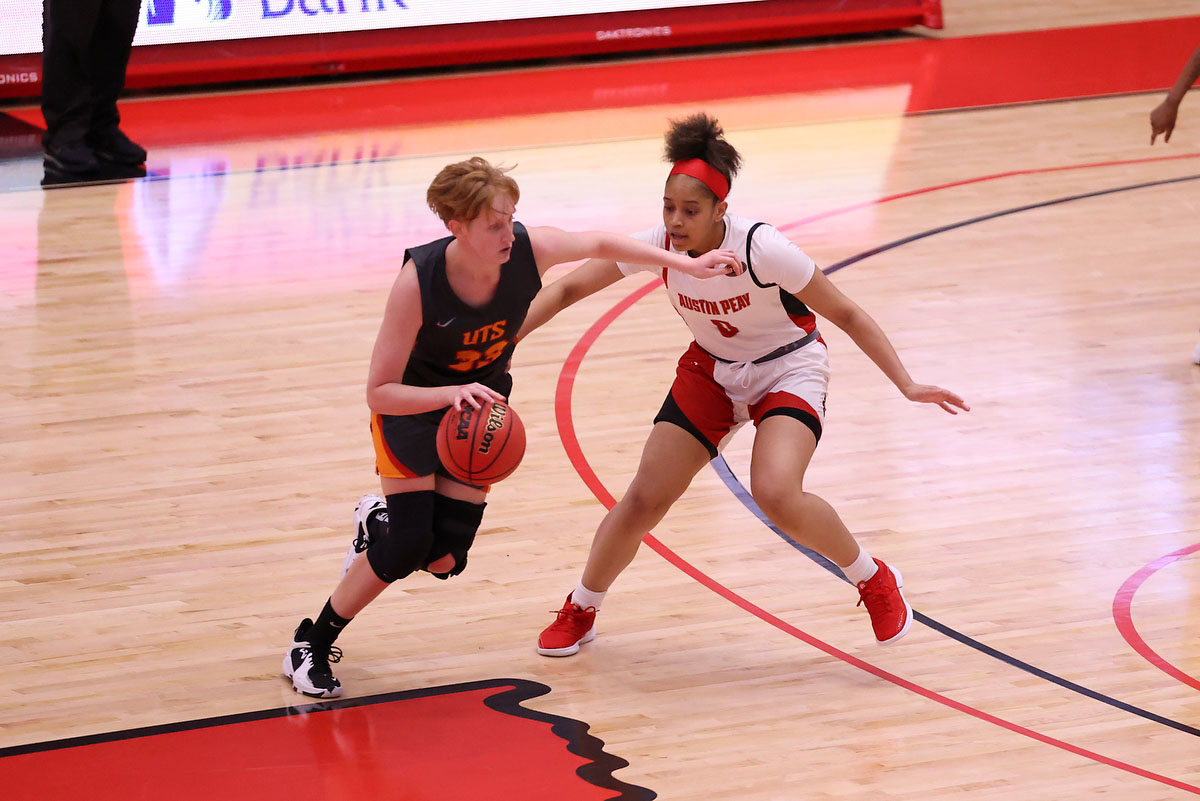 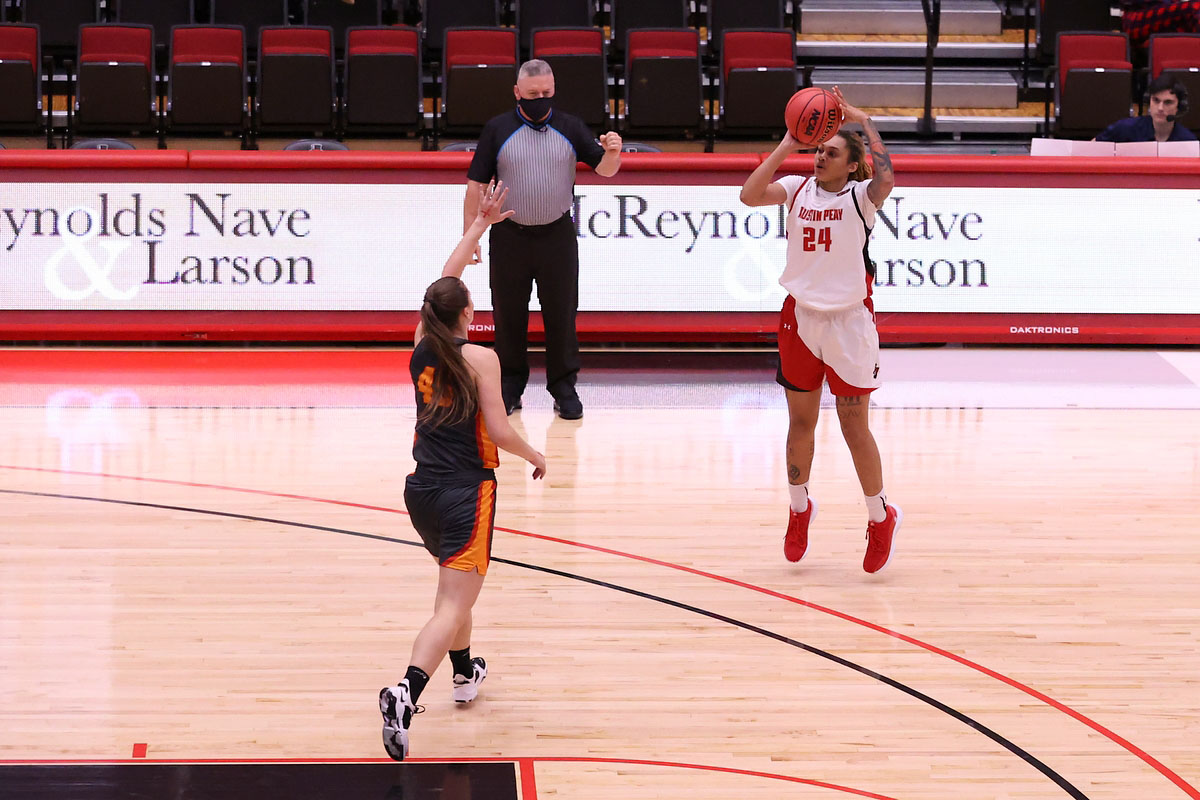 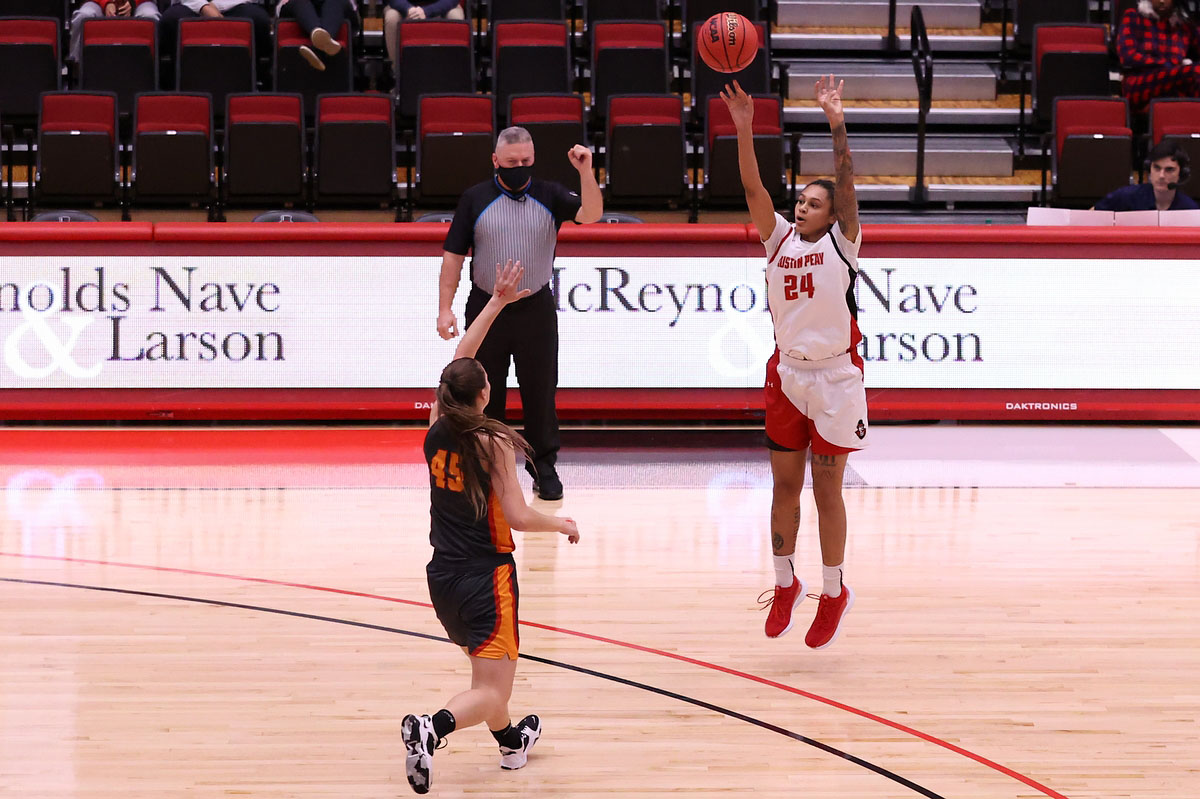 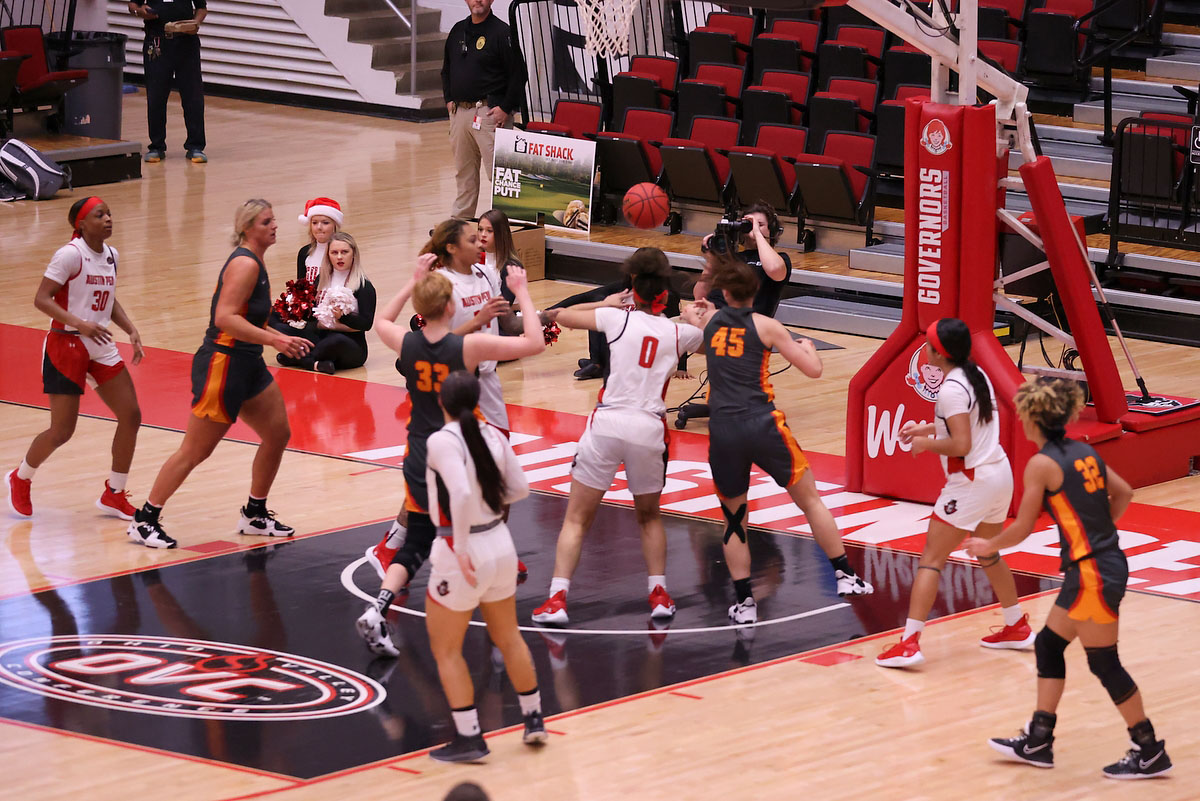