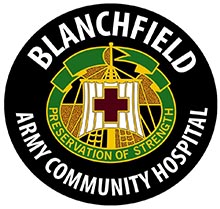 Fort Campbell, KY – Santa Claus made an unplanned stop on Fort Campbell, Kentucky, December 20th after an elf conducting a solo chimney reconnaissance mission over the surrounding Tennessee and Kentucky communities was injured in a sleigh accident.

Fort Campbell emergency medical service personnel responded to the accident scene off post where they stabilized the elf and transported it to Blanchfield Army Community Hospital for further evaluation.

When asked for its primary next of kin, the elf gave the name and contact information for Santa Claus.

“The little elf had a broken leg and had no way to get back to the North Pole so we reached out to the emergency contact in the patient’s medical record, Santa Claus,” said Paula Rollins-Ritschel, a registered nurse in Blanchfield’s emergency center. “It was late in the evening when Santa arrived and since the elf was still under observation the treatment team referred Santa to the Fort Campbell Fisher House adjacent to the hospital.”

Fisher Houses provide military families housing close to a loved one in the hospital for an illness, disease or injury. There are more than 80 homes located at military and VA medical centers around the world,” said Wendy Carlston, Fort Campbell Fisher House Manager.

Santa wore his mask and greeted others guests in the house until the elf was released from the hospital early the next morning. Before leaving the elf thanked hospital staff for its care and asked them to sign its cast.


Santa and the elf then departed via Santa’s sleigh, Sleigh Force One, from the hospital’s helicopter pad.

Santa and his elves are currently preparing for an annual exercise with the North American Aerospace Defense Command, at Peterson Air Force Base, Colorado. The exercise begins at 4:00am MST, December 24th, 2021 when NORAD volunteers will track Santa’s trip around the world beginning at the international dateline.

To learn more about the exercise and track Santa’s journey visit www.noradsanta.org