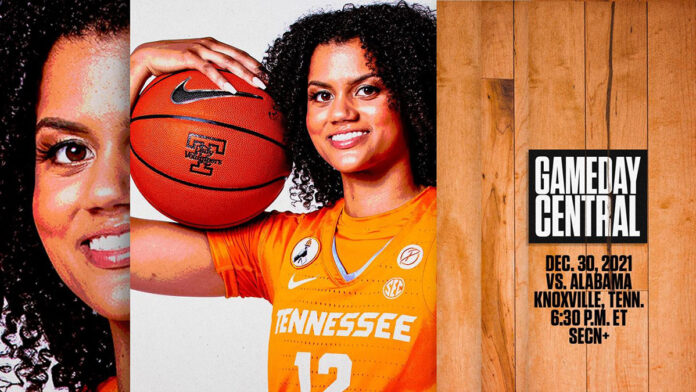 The Lady Vols and Crimson Tide are set to tip-off at 5:32pm CT in Thompson-Boling Arena in what will be the final game of 2021 for both programs. The UT and UA men’s teams also opened league play against one another, facing off on Wednesday evening at Coleman Coliseum in Tuscaloosa.

Thursday night’s match-up marks the end of a five-game run of home events in December for UT and the sixth home tilt out of seven total contests during the year’s final month.

Tennessee returned from winter break to a week with three games, starting at home with Chattanooga on Monday and then looking ahead to Alabama on Thursday and then at Arkansas on Sunday. The Lady Vols opened the trio of games with a resounding 91-51 romp over Chattanooga, shooting 54.4 percent from the field via a season-best 30 assists, out-rebounding the Mocs, 56-24, and holding UTC to 22.6 shooting from the field.

Alabama, meanwhile, has been idle since December 13th, when the Crimson Tide claimed its seventh-straight victory with an 84-50 triumph over Sam Houston in Tuscaloosa. The Tide had games slated for December 16th at Little Rock and December 20th vs. Winthrop, but those games were canceled because of a flu outbreak at UALR and then due to COVID-19 protocol within the UA program for the contest vs. WU. Of note, Bama met UT’s most recent opponent, Chattanooga, on December 5th, and registered a 16-point victory over the Mocs.

Andy Brock (play-by-play) and LVFL Kamera Harris (analyst) will be on the call for the SECN+ broadcast.

Flex Pack: Get admission to five games vs. SEC opponents, with prices starting at $24.00.

For additional details and information, please call 865.974.1734 or visit the Fans tab on UTSports.com and click on the Fan Experience link.

Kellie Harper is 2-0 at UT in SEC openers, winning vs. Missouri and Arkansas in her first two seasons.

In its first SEC home game of the season, Tennessee is now 34-5, winning four of its last five such games.

Harper is 1-1 in UT’s first SEC road game of the season, falling at Kentucky in 2020 and defeating LSU last season.

Tennessee Head Coach Kellie Harper is 19-10 in SEC games in her third year leading the team and has a 2-2 record in SEC Tourney play.

The Lady Vols were picked second in the 2021-22 SEC Preseason Media Poll and No. 3 in the SEC Preseason Coaches Poll, marking their best positions since 2015-16 and 2016-17, respectively.

Lots Of Connections In This One

This year’s Tennessee squad features three players who hail from Alabama, two coaches who spent their childhood in the state, and two more coaches who worked at a university there. Alabama features a former UT staffer on its payroll.

Dye and Bama’s Brittany Davis were teammates at Gulf Coast State College in 2018-19 and helped the school to a JUCO national title.

UT assistant Samantha Williams was born in Luverne, AL, before later moving to Louisville, Ky., while Joy McCorvey is from Brewton, AL, and graduated from T.R. Miller High School.

Head coach Kellie Harper spent two years from 1999-2001 on Joe Ciampi’s staff at Auburn (admin. asst., then assistant coach), while Jon Harper graduated from Auburn and spent three seasons as a practice player, manager and intern for Ciampi from 1996-99.

Samantha Williams played for the Tigers during Jon Harper‘s time there.

Alabama director of operations Brian Johnson is in his sixth season with the Tide and spent four seasons on Holly Warlick’s Lady Vol staff as a manager, graduating from UT in 2016.

The UT Lady Vols are one of the nation’s biggest stories of 2021-22, opening up at 11-1 against one of the NCAA’s toughest schedules despite losing returning starters Rae Burrell and Marta Suárez to injuries and with Jordan Horston missing two games.

Tennessee is among the nation’s best at rebounding and defending, but its offense is emerging with different members of the team stepping up each game and younger players gaining experience.

Eleven different players have scored in double figures this season, including eight who have done so in multiple games. Karoline Striplin became the eighth Lady Vol to twice hit double figures, doing so with 10 vs. ETSU and 12 against Chattanooga.

The Lady Vols had at least one player record a double-double in the first 11 games this season, led by Tamari Key with six (including a triple-double), Jordan Horston with five, Alexus Dye with two, and Kaiya Wynn with one.

That gives Tennessee 14 total double-doubles this year, surpassing the total of 13 in all of 2020-21.


The 11-game streak, which was both a season-opening UT record and an overall program best, came to an end vs. UTC. Karoline Striplin (12/9) and Alexus Dye (15/8) were oh-so-close to continuing the run.

UT has shown itself to be a tough, gritty team, coming from behind in the fourth quarter four times this season to win games (Southern Illinois, South Florida, Texas, Virgina Tech). UT also came from 20-down in the second quarter vs. No. 3/3 Stanford, cutting the deficit to three in the second half with a 17-0 run spanning the second and third periods before eventually falling to the Cardinal.

Tennessee is led by 6-2 junior guard Jordan Horston, who paces the team in scoring (15.1 ppg.), rebounding (9.4) and assists (3.9 apg.) in a breakout season. She missed the Chattanooga game due to illness.

Freshman guard/forward Sara Puckett is UT’s fourth-leading scorer. She is putting up 9.0 ppg. and is shooting 50.6 percent from the field, 39.4 percent on threes and 81.3 percent on free throws, and has scored in double figures in five of her past seven contests. She got her first career start vs. UTC.

Point guards Jordan Walker and Brooklynn Miles have been UT’s most secure regulars with the ball, accumulating 39/22 and 29/20 assist-to-turnovers totals.

After the Tide halted a 42-game UT winning streak by claiming five straight from 2016 to 2019, Tennessee has struck back by winning the past two meetings.

Against the Crimson Tide, the Lady Vols are 23-1 in games played in Knoxville, 19-3 in Tuscaloosa and 9-3 at neutral sites.

After Alabama held Tennessee to 65 points or fewer in six straight meetings, the UT Lady Vols exploded for 82 in Tuscaloosa last season.

Megan Abrams led Alabama (9-2) in scoring, recording 21 points on 7-of-10 shooting, including knocking down a pair of 3-pointers, and a 5-of-8 effort from the line. It marked the graduate’s fourth game of scoring more than 20 points this season.

Five players scored in double figures for the third time this season, as JaMya Mingo-Young (15), Brittany Davis (14), Hannah Barber (11) and Taylor Sutton (11) rounded out the fivesome. Mingo-Young put together back-to-back double-double games, adding 11 rebounds, two steals and two assists to her stat line against Sam Houston (4-5), and in just 22 minutes of action.

When UT And UA Last Met

Davis added 10 rebounds to her 21 points to record her 34th career double-double. Junior Rae Burrell and sophomores Tamari Key and Jordan Horston were also in double figures for Tennessee (9-2, 3-1 SEC), finishing with 17, 15 and 14 points, respectively.

UT, which won its second straight over the Crimson Tide, improved to 51-7 in the all-time series and 17-2 in games at Coleman Coliseum.

The Tennessee women’s basketball team hits the road for its first trip to an SEC campus this season, with an 11:00pm ET (Noon CT) tilt  Sunday at Arkansas on SEC Network.