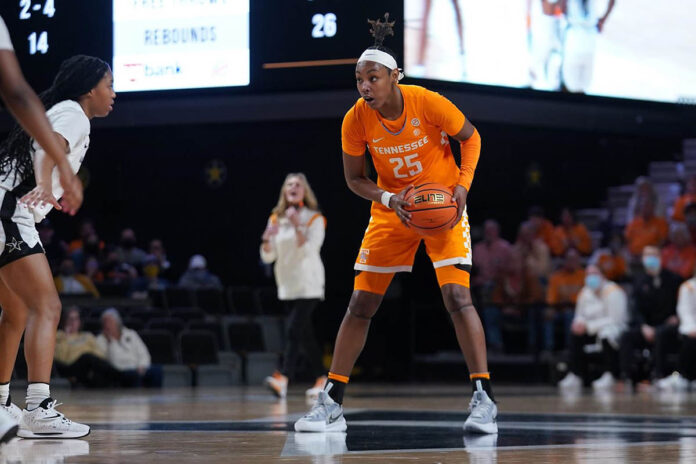 UT (16-1, 5-0 SEC), which is off to its best league start since opening at 13-0 in 2014-15, was led by junior Jordan Horston. The 6-foot-2 guard stuffed the stat sheet with 16 points, 13 rebounds, five assists, and a career-high-tying four blocks. Senior Rae Burrell and junior Tamari Key were also in double figures with 11 and 10, respectively.

Alexus Dye opened the night with six straight points, tying the game up at 6-all before Tamari Key hit a layup to give the Lady Vols a two-point lead by the 6:46 mark. The game was tied at nine two and a half minutes later, but Tennessee closed out the quarter with a 9-2 run to take an 18-11 lead into the second.

A Vandy jumper by Kaylon Smith cut the lead to five, but a trey and a pair of free throws by Jordan Walker had Tennessee up by eight just over two minutes into the quarter. Jordyn Cambridge hit a 10-foot jumper on the next possession, but a 3-pointer by Horston kicked off a 12-1 run that put UT up 35-18 with just under three minutes remaining in the half.

Moore hit a basket to end the skid for the Commodores, but Burrell hit back-to-back baskets, and Key capped off the scoring for the half while Tennessee held VU to three points, putting the Lady Vols up by 18 with a halftime score of 41-23.

Horston and Key opened the scoring in the second half, setting in motion a 7-0 run that spanned more than six minutes and extended UT’s lead to 25 points. Yaubryon Chambers scored Vandy’s first points of the half from the free-throw line at the 3:35 mark.

Alexander rallied the Commodores, scoring six straight points to fuel an 8-0 run that pulled VU within 17 with 47 seconds left in the period, but Burrell was fouled behind the arc and hit all three free throws to send the game into the fourth with her team-leading by a score of 53-33.

Horston knocked down a pair of free throws to start the fourth, but Alexander and Demi Washington combined for five quick points to cut the deficit to 17 with 8:46 left in the game. The teams traded baskets through the middle of the quarter until six straight points by Moore and a jumper by Flournoy pulled Vandy within 13 with 1:23 to play.

Moore kept the pressure on with a 3-pointer that got VU within 11 with 44 seconds left in the game, but the Lady Vols fended off the run, scoring three additional points before the final buzzer to make the final score 65-51.

Tennessee’s defense continues to pose problems for opponents, with the Commodores being held to 26.7 percent shooting on the night, 15.3 percent below their season average of 42.0. The Lady Vols’ defense has kept all 17 opponents at 36 percent shooting or below this season, and through five SEC games Tennessee is holding opponents to just 28.0 percent from the floor.

Tennessee, the nation’s No. 1 rebounding team, pulled down 50 boards yet again. It marked the 10th time this season and the third occasion in five SEC contests that the Lady Vols had grabbed that many caroms.

The Tennessee women’s basketball team returns home for a top-25 match-up against #19/20 Kentucky on Sunday. The contest is UT’s We Back Pat game and will be broadcast on ESPN. Tipoff is set for 2:00pm CT.