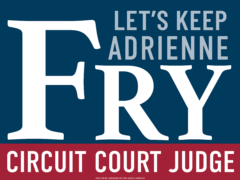 Judge Fry, who was appointed by Tennessee Governor Bill Lee last year to fill the vacancy left by the retirement of Judge Ross Hicks, is a graduate of the University of Tennessee College of Law and has practiced for over a decade throughout both Montgomery County and Robertson County.

Judge Fry lives in Clarksville with her daughter Raleigh and Fiancé Daniel Bryant. They attend Immaculate Conception Catholic Church and are involved in numerous non-profits including as a mentor in the TN Achieves Program which helps mentor young people as they enter college.