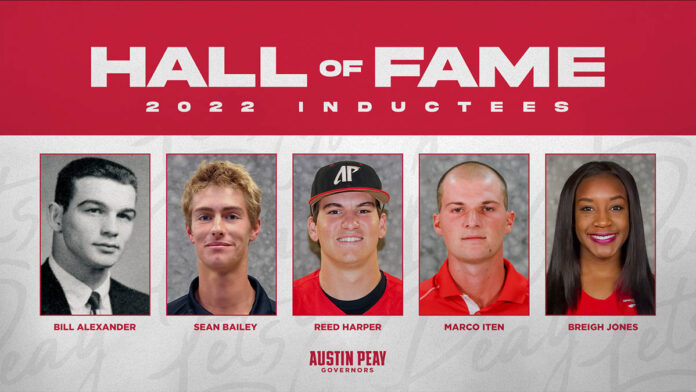 The athletics department will honor members of the 2022 Hall of Fame Class during a dinner Friday, February 18th, at the Morgan University Center on the Austin Peay State University campus. Tickets for that event are available by contacting Tara Patterson by email ().

The athletics department will recognize the class at halftime of the Saturday, February 19th men’s basketball game against Tennessee State. Tickets for that game are available for purchase online at LetsGoPeay.com/BuyTickets.

Bill Alexander was a member of the Governors football and track & field teams during the mid-1950s. He played tailback and defensive back on the gridiron and was a two-time All-Volunteer State Athletic Conference selection.

Alexander was named to the Nashville Banner All-Midstate College team in 1954 and was the 1954 Charity Bowl’s Most Outstanding Player. On the oval, Alexander competed in the 100- and 220-yard dashes and set the school records in both events during his three years.

In 2011-12, he was named the OVC Men’s Tennis Player of the Year, named one of the Ohio Valley Conference’s six Scholar-Athlete Award winners, and was APSU’s Most Outstanding Male Athlete. He was a CoSIDA Academic All-American the following year and earned the OVC’s Steve Hamilton Award.

Reed Harper began his Austin Peay career as a walk-on, but he set the program and OVC records for most games played and started in a career – playing all 237 games by the end of his career. A member of the Governors historic Three-Peay-t teams (2011-2013), he twice was First Team All-OVC at shortstop, was a two-time OVC All-Tournament team honoree, and was named the ‘Most Valuable Player’ of the 2013 OVC Tournament.

In the classroom, Harper earned distinction as a four-time CoSIDA Academic All-District selection, culminating with Academic All-America Third Team honors in 2012. Harper capped his collegiate career by being named APSU’s 2012-13 Legends Award winner and then selected in the 25th round of the 2013 Major League Baseball Draft by the Atlanta Braves.

Marco Iten was the first, and to date only, golfer in program history to win the individual title at an NCAA Men’s Golf Regional Championship, claiming the 2014 Auburn Regional by four shots. A three-time All-OVC selection, twice earning first-team honors, he was part of a remarkable stretch that saw Austin Peay State University’s golf team finish first (2013) or second (2012, 2014) at the OVC Championship.

Iten was selected as an at-large competitor to the 2014 NCAA Men’s Golf Championship after winning the OVC Championship that season, eventually winning the regional title and advancing to the national championship. He was named APSU’s 2014 Male Athlete of the Year and currently plays on the European Challenge Tour.

Breigh Jones made three NCAA East Preliminary appearances during her Austin Peay career and was the track & field program’s first NCAA Championship participant in 14 years when she earned a spot in Oregon in 2014, where she finished 20th nationally in the 400-meter dash. Jones finished her career with 16 OVC Track & Field Championship medals – five of those gold – and was the 2015 Outdoor Track Athlete of the Year.