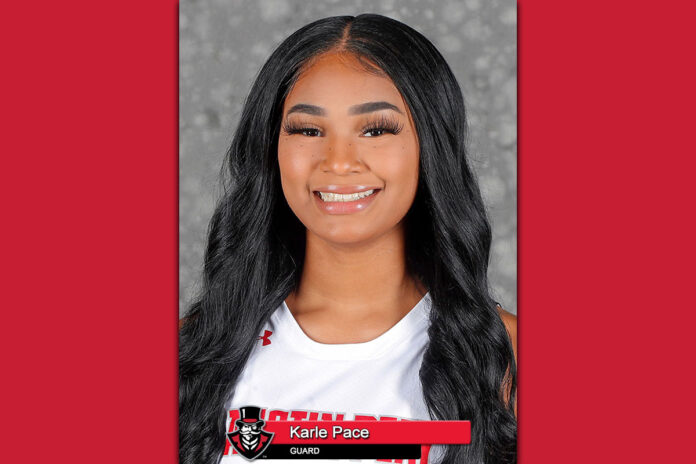 Brentwood, TN – After averaging 22 points and leading the Austin Peay State University (APSU) women’s basketball team to a pair of wins, Karle Pace has been named the Ohio Valley Conference Player of the Week, the league announced Tuesday.

Pace started the week by scoring a team-high 23 points against Murray State and going a perfect 5-for-5 from behind the arc in the contest. However, her biggest shot came with 1.2 seconds left in overtime, when she hit a game-winning floater to secure the Governors’ fifth-straight win against the Racers.

Karle Pace also grabbed a season-high six rebounds and dished out four assists against Murray State. Her five three-pointers are the best single-game mark by a Gov this season and her 100-percent performance from distance is tied for the top mark in the OVC.

Against Morehead State, Pace went 3-for-5 from three-point range en route to a team-high 21 points. The 5-6 guard went 6-for-8 at the free-throw line against the Eagles and led the APSU Govs with four assists in the contest.

Pace and Johnson are the first Austin Peay State University duo to earn OVC Player of the Week honors multiple times in the same season. The 2001-02 and 2002-03 teams each had three players earn player of the week recognition, but Gerlonda Hardin was the only player to earn the award multiple times during both of those seasons.


Pace and the rest of the Austin Peay State University women’s basketball team are back in action at the Winfield Dunn Center this week when they host a Thursday game against Southeast Missouri that starts at 5:00pm and a Saturday game against Tennessee State with a 1:30pm tip-off.