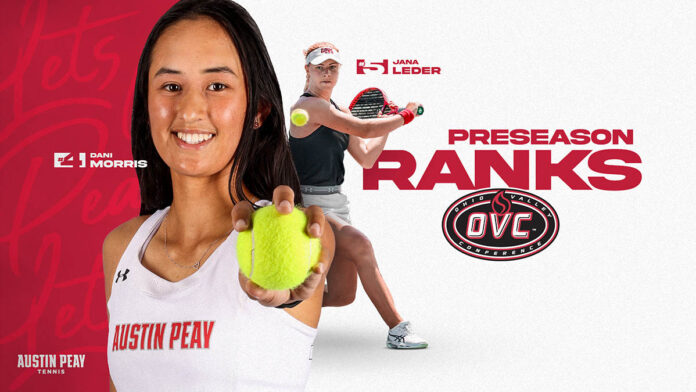 In addition, the Governors were predicted to finish second in the league’s preseason poll, the conference announced, Tuesday.

Senior Danielle Morris received her third-career Top 10 ranking and was named the No. 4 player in the conference, while redshirt sophomore Jana Leder received a fifth-place ranking in her second-straight selection.

Morris has been ranked in the OVC’s Preseason Top Ten Player Rankings each year she was eligible and continues her gradual move up the list with the top-four selection. She was the No. 5 player last season after receiving a No. 6 ranking prior to her sophomore campaign.

A Second Team All-OVC selection last season, Morris finished with a 9-5 singles record exclusively playing the No. 2. After dropping her first two OVC singles matches, she won her final six in singles, including the championship-clinching match against Southeast Missouri’s Daniela Hlacikova – the No. 3 selection in the preseason poll.

The Brisbane, Australia native went 12-3 in doubles, playing exclusively on the No. 1 line with a 12-2 mark alongside a former teammate, Schmidt. Morris also won a pair of singles and doubles matches last season against players named in this year’s preseason ranking.

After being named the 2021 Co-OVC Freshman of the Year and a First Team All-OVC selection, Leder enters this season tabbed as the No. 5 player in the conference, a two-spot improvement from her seventh-place ranking in 2021.

Leder led the APSU Govs with 12 victories in singles, playing exclusively the No. 3 position. After dropping two of her first three singles matches to start the year, the Remchingen, Germany native won 11-straight to finish the season and posted a perfect 8-0 record in singles during OVC play.

Leder finished the season 8-5 in doubles, with a 7-4 mark alongside Aleks Topalovic on the No. 2 doubles court. She finished with a 5-1 combined record against players in this season’s preseason ranking, including a 4-1 mark in doubles.

Morris and Leder’s selections in the preseason poll are the 20thand 21st time a Govs has received the honor in the last decade. Additionally, the duo is the 13th and 14th women’s tennis players to rank in the top five of the poll under Brown.

Austin Peay State University has already started its 2022 season and returns to action on February 19th, when kicks off a four-match road trip against Louisville at the Badd-Rudd Tennis Center in Louisville, Kentucky.