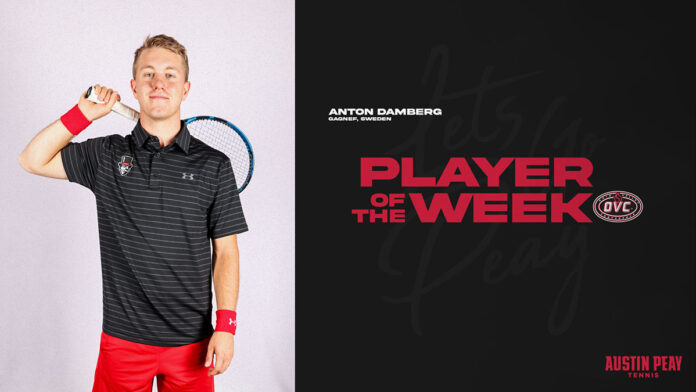 In Austin Peay’s first match of the week, Damberg defeated Cumberland’s Hugues N’Goma, 6-4, 7-5 from the No. 3 position. The win was Damberg’s first of the season and capped the Govs’ 5-2 victory against the Phoenix.

Damberg followed his match against Cumberland with a perfect outing the next day against Oakland City. He partnered with sophomore Frederic Schlossmann on the No. 1 doubles line and defeated the Mighty Oaks’ pairing of Teodor Zlatar and Andre Baltazar, 6-2. It was the duo’s first win together this season and the fourth of their careers.

After moving up to the No. 2 singles position against OCU, Damberg won his second straight-set match of the season in a 6-1, 6-1 victory over Baltazar.

After winning the award for the first time in his career, Damberg is the first Austin Peay men’s tennis player to be named OVC Player of the week since Schlossmann received the award April 14th, 2021. The Gagnef, Sweden native is the 11th player to receive the honor under head men’s tennis coach, Ross Brown.

Damberg and the rest of the Austin Peay State University men’s tennis team are back in action on Friday at 1:00pm when the Govs host Southern Indiana at the Evansville Tennis Center in Evansville, Indiana.