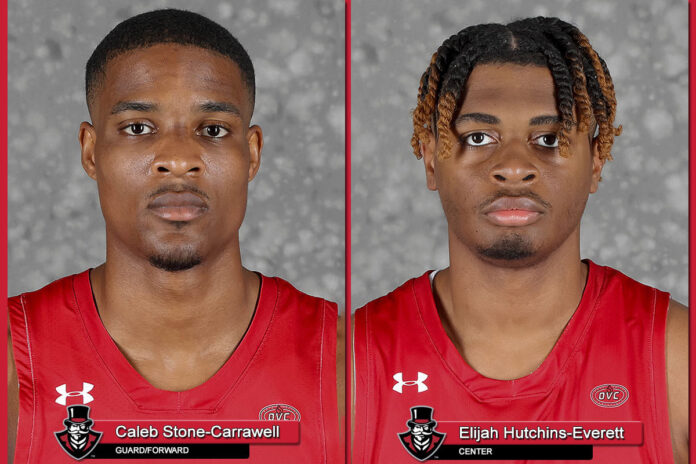 Stone-Carrawell was named OVC co-Newcomer of the Week while Hutchins-Everett was named OVC Freshman of the Week for the fifth time this season. The duo helped the Govs go 2-0 last week with a pair of road victories at SIU Edwardsville and Eastern Illinois.

Stone-Carrawell led the APSU Govs last week at 17.5 points per game while shooting a staggering 61.1 percent from the field. The Concord, NC, native did most of his damage at the free-throw line, shooting 90.9 percent from the charity stripe. In a 68-64 overtime victory over SIUE Thursday, Stone-Carrawell led the Govs with a career-high 24 points on 8-of-13 shooting from the field. The redshirt freshman guard also tallied three rebounds to go along with a career-high six assists.

In the regular-season finale against Eastern Illinois, Stone-Carrawell once again led the Govs in scoring with 13 points on 3-of-5 shooting from the field. Stone-Carrawell also amassed a perfect 5-for-5 performance from the free-throw line en route to his fourth straight double-digit scoring performance.

For the fifth time this season, Hutchins-Everett earns OVC Freshman of the Week honors after averaging a double-double at 11.5 points and 10.0 rebounds last week. The freshman center posted back-to-back double-double as the Govs secured the No.6 seed in the OVC Tournament with two wins over SIUE and Eastern Illinois.