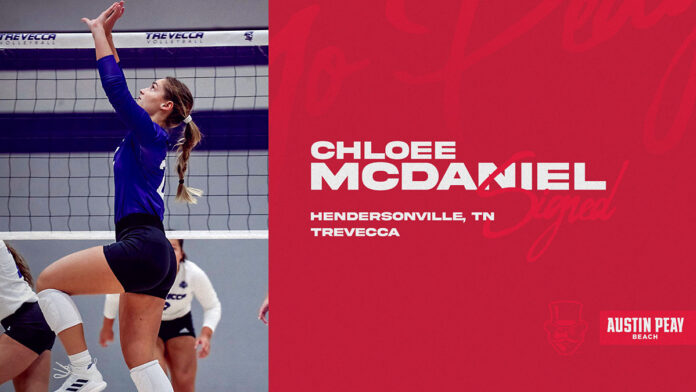 “Chloee’s mother owns a beach club in Nashville; so, she has grown up around beach volleyball,” said associate beach volleyball head coach Travis Leblanc. “Chloee had a great career at Trevecca and with her experience, she will be able to come in and compete in our program immediately.”

Her mother owns a beach club in Nashville and she will bring a wealth of experience to our program. She had a great career at Trevecca and she will be able to come in and compete in our program immediately.”

McDaniel began her collegiate career at Missouri State, where she was the first player to sign a National Letter of Intent to play beach volleyball for the Bears. McDaniel won nine matches during her lone season in Springfield, Missouri with four wins coming from the No. 1 position and five wins coming at the No. 2 line.

After her freshman season, the Hendersonville, Tennessee native transferred to Trevecca, where she played on the indoor volleyball team. In her first season at Trevecca, McDaniel averaged 8.35 assists per set in 113 sets played.

Before her collegiate career, McDaniel was a four-time all-conference and all-region selection at Beech High School in Hendersonville, Tennessee. McDaniel’s sister, Hailee, played volleyball at Maryville College and her sisters, Ellee and Rylee, are currently on the volleyball team at Chattanooga State.