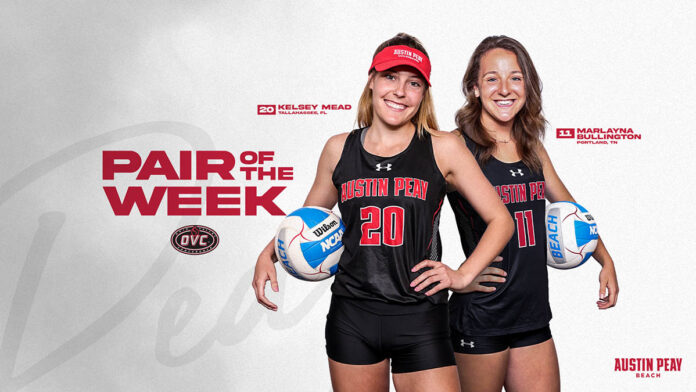 After picking up three wins last week, Bullington and Mead’s 3-4 mark is the second-best on the team this season. They are currently one of three Austin Peay duos on a three-match winning streak.

Bullington, a native of Portland, Tennessee, and Mead, a native of Tallahassee, Florida, are just the second duo in program history to be named OVC Pair of the Week, joining Caroline Waite and Eliza Dees (3/10/20).

After a week off, Bullington and Mead will put their three-match winning streak to the test at the OVC Weekend at Chattanooga, March 25th-26th. The Governors will play an 8:00am (CT) match against Eastern Illinois and a 2:00pm Morehead State, Friday. Then it’s a noon match against UT Martin and a 4:00pm match against host Chattanooga, Saturday, at the Beach Volleyball Facility at the UT Sports Complex.