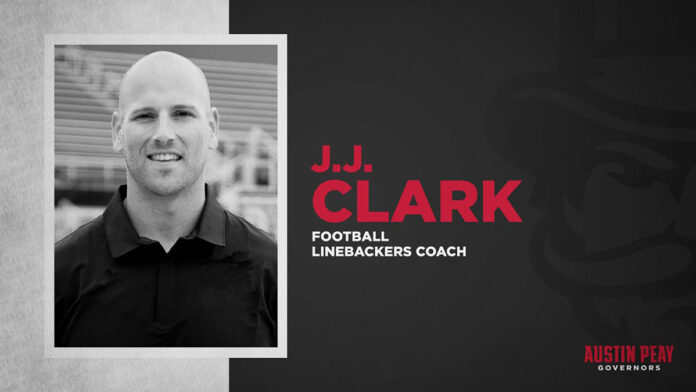 “JJ is an up and comer in the profession and has a tremendous football pedigree,” said Walden. “Throughout the interview process, he displayed many qualities that align with our culture and our vision for Austin Peay football. He has a genuine care for people and loves developing young men. In addition, he has a ton of grit and passion about the game of football that will be infectious with our players. I am extremely excited to welcome him and his family to Clarksville!”

Clark was the defensive coordinator at Indiana Wesleyan since 2018. In his first season in Marion, Indiana, the Wildcats allowed just 21.2 points per game and that number dropped to 18.8 points per game in Clark’s second season. During the 2021 season, Clark’s defense got even stingier, holding opponents to 11.9 points per game – the second-fewest at the NAIA level.

Indiana Wesleyan also intercepted 11 passes and forced 19 fumbles – 11 of which were recovered – during Clark’s final season as defensive coordinator. Clark, who was named the 2021 Mid-States Football Association Assistant Coach of the Year, helped six Wildcats’ defenders earn All-MSFA honors in 2021. Also under Clarks’ tutelage, defensive back Justin Johnson was named an NAIA First Team All-American after racking up 52 tackles, three sacks, three forced fumbles, and a pair of interceptions.

During his time at Indiana Wesleyan, Clark also served as the program’s defensive backs coach and strength and conditioning coordinator.

“I am incredibly excited to be joining the Austin Peay State University football program,” said Clark. “After meeting with Coach Walden, Coach Kappas, and the rest of the staff, it was evident to me that not only does the program have a tremendous amount of momentum, it is also one that is truly striving to build men of character through the pursuit of excellence on the football field. I’m excited to join in and work towards that goal with the high quality of people that make up this program.

“I want to thank Jordan Langs and the rest of the Indiana Wesleyan staff for the coaching experience of a lifetime and one that has prepared me for this position. I would also like to thank my wife Sam, and my unbelievable family for their unwavering love and support. They are my greatest inspiration.”

Before moving to Indiana Wesleyan, Clark spent four years in various roles at Wheaton College. In 2015 he was the defensive pass game coordinator and cornerbacks coach, leading a unit that ranked seventh at the Division III level with 22 interceptions and was tied for second with five pick sixes.

During the 2016 season, Clark served as the Thunder’s co-defensive coordinator, linebackers coach, and strength and conditioning coordinator. With Clark at the helm, the Wheaton defense ranked 14th in the NCAA in total defense (169.5 yards per game), 18th in scoring defense (15.7 points per game), and second in rushing yards per game (66.3).


Clark was once again promoted following his second season at Wheaton and spent the next two years as the defensive coordinator, defensive backs coach, and strength and conditioning coordinator. During his final two seasons Wheaton, Illinois, Clark’s defense allowed 12.8 points per game in 2017 – which ranked 10th in Division II – and allowed just 9.0 points per game in 2018 – which ranked third in the division.

During the 2017 season, the Thunder ranked second in DIII football in sacks per game (4.2) and third in tackles for loss per game (9.4). The following season, Clark’s unit ranks fourth in total defense (218.2) and ninth in rushing defense (66.2).

Prior to Wheaton College, Clark was a defensive graduate assistant, responsible for defensive backs, at Akron for the 2013 season. During Clark’s lone season at Akron, the Zips ranked 38th in the FBS in interceptions (13) and 44th in team passing efficiency defense (121.7).

Clark began his coaching career at Humboldt State, where he coached running backs during the 2012 season. The Lumberjacks ran for 195.6 yards per game, which ranked 32nd at the NCAA Division II level, and 22 touchdowns during Clark’s lone season leading the backfield.

Before his coaching career began, Clark worked as a football operations assistant during the Seattle Seahawks training camp from 2007-10.


Clark was a four-year letterwinner and three-year starter at tight end and fullback at Wheaton College, 2008-11. He was named to the 2011 NCAA Division III Capital One Academic All-America Second Team selection during his senior season.

Clark received his bachelor’s degree in history from Wheaton College in 2012, he then earned a master’s degree in sports science and administration from Akron in 2014. Him and his wife Samantha have two sons, Shepard and Seeker.

Walden has also made several other changes to his coaching staff for the 2022 football season. Antonio Bradford will move into the role of tight ends coach after serving as a senior offensive analyst in 2021. Joe Pappalardo will assume full control of the Governors’ special teams and also will take on the role of Gov Backs coach, while Brian Baca will transition from tight ends to quarterbacks caoch for 2022.

Off the field, Mason Robinson will be the APSU Govs recruiting coordinator and Buddy O’Dell will be the assistant director of football operations. Austin Cordova will serve as a defensive analyst with Robert Burke taking the same role on the offensive side of the ball. Finally, Matthew Moore will take over as Austin Peay State University’s video coordinator for the 2022 season. A full list of coaching responsibility changes can be seen below.

Walden and his staff continue their first spring practice since his arrival, culminating in a spring game on Saturday, April 9th at Fort Campbell High School’s Fryar Stadium in Fort Campbell, Kentucky.

With Austin Peay State University’s first season in the ASUN Conference on deck this fall, football season ticket information will be made available in the near future. Game times and full broadcast information will be available at a later date. To keep up with everything Governors football this offseason and during the season, follow along on Twitter (@GovsFB) and Instagram (@GovsFootball), or check back at LetsGoPeay.com.