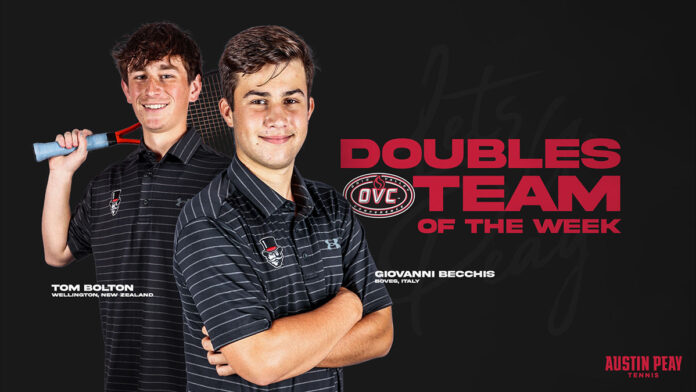 Brentwood, TN – After a perfect week at the No. 2 doubles line, Austin Peay State University’s freshman pairing of Tom Bolton and Giovanni Becchis have been named the Ohio Valley Conference Co-Men’s Doubles Team of the Week the league announced, Tuesday.

Bolton and Becchis went 2-0 in doubles over the week, finishing the nonconference season with a team-best three-match winning streak and 4-1 record.

The Govs’ pairing kicked off the week with a 6-2 victory against the University of the Cumberlands, Wednesday, in Williamsburg, Kentucky, and followed the performance by picking up the doubles-clinching point in APSU’s 4-3 victory against North Alabama, Saturday, at the Governors Tennis Courts.

In addition to his strong doubles play, Bolton also proved vital in singles play, capping off the Govs’ 3-1 comeback against UNA with a three-set victory from the No. 4 position.

Bolton and Becchis are the first freshmen to win an OVC weekly honor since Frederic Schlossmann was named the OVC Player of the Week April 14th, 2021. The duo is also the second pairing to be named the conference’s doubles team of the week, after Schlossmann and Anton Damberg won the award, February 22nd.

Bolton, Becchis, and the rest of the APSU men’s tennis team are back in action as they begin OVC play against the reigning tournament champions in Belmont on Saturday, at the Belmont Tennis Complex in Nashville, Tennessee. The match begins at 3:00pm.