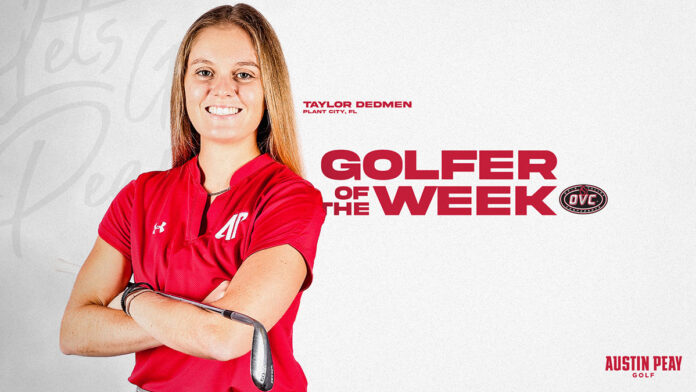 The Plant City, Florida, native won Southern Illinois’ Diane Daugherty Invite in dramatic fashion on the 54th and final hole of the tournament. Dedmen trailed by a shot entering the par-four 18th before driving the green and sinking a long eagle putt to win the tournament.

Dedmen was tied for second entering the final day at the Bogey Hills Country Club in St. Charles, Missouri after carding a 74 and 73 in her first two rounds. She then used a two-over 73 in the final round to move atop the leaderboard with a score of 220. Her tournament-winning score also helped the Governors claim a third-place finish as a team.

The senior’s aggregate score of 220 is tied with Reagan Green’s 220 at the 2019 Ohio Valley Conference Championship as the third-best 54-hole score in program history – Dedmen now has three of the top-five 54-hole scores in APSU history.

Dedmen’s win at the Diane Daugherty Invite marks the first individual tournament victory by a Governor since Green won Tennessee State’s 2018 Town and Country Invitational. Dedmen is also just the third golfer in program history to win a three-round tournament since digital recording keeping began, joining Chelsea Harris at the 2010 OVC Championship and Amanda Phillips at the 2001 OVC Championship.