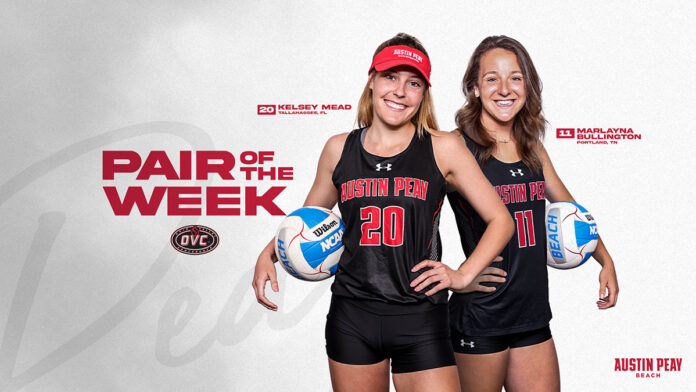 Bullington and Mead went 4-2 last week, starting with a pair of two-set wins in a doubleheader against North Alabama at the Govs Beach Volleyball Complex.

The duo won both sets of the first match 21-16 before closing the second match with a dominant 21-8 win in the second set.

At the GSU Diggin’ Duels, Bullington and Mead dropped their first match before rallying to pick up a marathon three-set victory against the No. 2 pairing from 13th-ranked Georgia State.

The APSU Govs tandem won the first set, 26-24, before falling, 28-26, in the second set. In the third set, Bullington and Mead needed extra points again to claim the match, winning 16-14.

On the second day of the GSU Diggin’ Duels, Bullington and Mead started the day with a two-set win against Chattanooga’s Baylee Young and Gylian Finish on the No. 1 line before dropping a three-set decision to Tampa.

Bullington, a native of Portland, Tennessee, and Mead, a native of Tallahassee, Florida, lead Austin Peay with a 14-7 record this season, they have also won eight of their last 10 matches.

This is the fourth time this season an Austin Peay State University duo has been named the pair of the week – Brooke Moore and Mikayla Powell also won the award, on March 19th. This is the first time in program history a pairing has won the award in back-to-back weeks.

The penultimate regular-season event is on deck for Austin Peay State University beach volleyball when it hosts the Govs Beach Bash, April 15th-16th, at the Govs Beach Volleyball Complex. The Govs get started with a Friday 10:00am match against Jacksonville State before playing a 4:00pm match against Eastern Kentucky to conclude the first day.