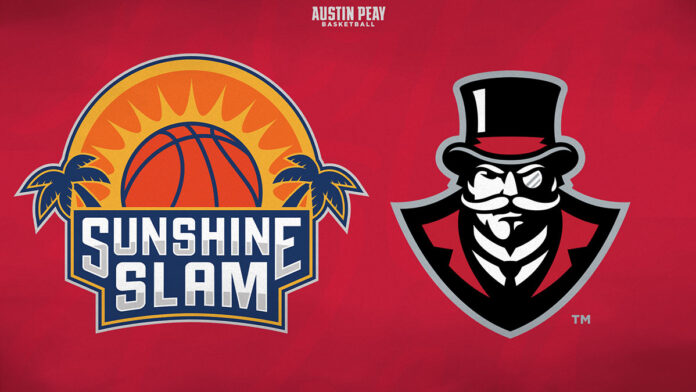 For the third time, the Sunshine Slam will feature eight schools taking part in two four-team brackets played at the Ocean Center Convention Center in downtown Daytona Beach. The tournament will also include four regional round games to take place at campus sites.

[32left]Along with the Govs, the Ocean Bracket will consist of Albany, Bucknell, and Presbyterian. The Beach bracket consists of Georgia, Saint Joseph’s, South Florida, and UAB. Match-ups, television details, and game times will be announced at a later date.

Tickets may be purchased in advance at TicketMaster.com or on the day of the competition at the Ocean Center Convention Center box office.

Bucknell Bison (9-23, 5-13 Patriot)
Led by eighth-year head coach Nathan Davis who has compiled a record of 117-95 at Bucknell. The Bison are led by Xander Rice who during the 2021-22 campaign averaged 13.1 points per game while tallying a team-high 125 assists.

Albany Great Danes (13-18, 9-9 America East)
Albany lost three straight to end the 2021-22 season including a 49-61 loss to Hartford in the America East tournament. The Great Danes averaged 61.8 points per game last season and shot 41 percent from the field and 32.3 percent from long distance.

Presbyterian (12-20, 4-12 Big South)
Guard Rayshon Harrison led the Blue Hose last season, playing and starting in all 32 games and averaging 17.1 points per game. As a team Presbyterian averaged 67.8 points per game and shot 42.4 percent from the field.

Georgia (6-26, 1-17 SEC)
The Bulldogs are led by first-year head coach Mike White who in 11 seasons at Florida and Louisiana Tech has averaged more than 22 wins per season. Last season Georgia had four averaging in double figures led by Kario Oquendo at 15.2 points per game.

South Florida (8-23, 3-15 American)
Under sixth-year head coach Brian Gregory, the Bulls ended the 2021-22 season having lost three straight contests including a 58-60 loss to Central Florida in the opening round of the American Athletic Conference Championship. On the offensive end, USF averaged just 57.5 points per game and shot 37.4 percent from the field.

UAB (27-8, 14-4 Conference USA)
The Blazers made their first trip to the NCAA Tournament since 2015 last season, falling to eventual Elite Eight participant Houston, 68-82 in the first round. UAB captured a program-record 27 wins and won its sixth Conference USA tournament title. As a team, the Blazers averaged 80.6 points per game while shooting a staggering 37.7 percent from long distance.