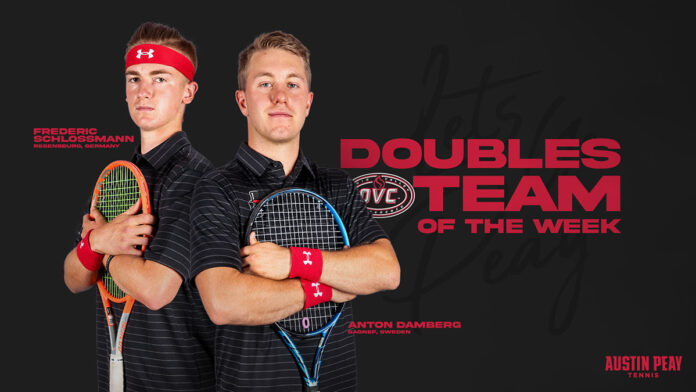 Brentwood, TN – Austin Peay State University (APSU) men’s tennis players Frederic Schlossmann and Anton Damberg finished the Ohio Valley Conference regular season with a pair of convincing victories from the No. 1 position, finishing unbeaten in conference play, and were named the OVC Men’s Doubles Team of the Week for the third time this season, Tuesday.

Schlossmann and Damberg have won five-straight matches since March 26th and lead all Austin Peay State University pairings with eight wins while exclusively playing on the No. 1 doubles court.

The duo kicked off the final week of the OVC’s regular season with a 6-3 victory against Tennessee Tech’s Mika Berghaus and Elias Grubert, on April 26th, before earning a 6-1 win against Tennessee State, Friday.

Schlossmann and Damberg outscored their opponents 22-11 in OVC play, holding each team to less than four games.

Schlossmann and Damberg are one of three pairings to have been named the doubles team of the week three times this season, joining Belmont’s Tomas Luis and Diego Castro and Eastern Illinois’ Thomas Wallace and Christos. Schlossmann and Damberg’s match went unfinished against Belmont’s top pairing and they defeated Wallace and Christos, 6-4, April 9th.

A Regensburg, Germany native, Schlossmann’s weekly honor is the fifth of his career – the most by any Governor in program history. The sophomore has won five singles matches this season from the No. 1 position, and has split his last four OVC matches.

After being recognized prior to Friday’s Senior Day match against Tennessee State, Damberg earned a convincing, 6-1, 6-1 victory from the No. 3 position in the final home match of his career. The Gagnef, Sweden native leads APSU with six singles wins, while playing most of the season in the No. 3 position.

Damberg was named the OVC Player of the Week, on February 15th, and joins Schlossmann as the only player to receive four or more OVC weekly honors under head men’s tennis coach, Ross Brown.


Austin Peay State University leads the conference with four OVC Doubles Team of the Week awards this season, with the freshman pairing of Giovanni Becchis and Tom Bolton also claiming the honor, on March 29th.

Schlossmann, Damberg, and the rest of the APSU men’s tennis team return to action at the OVC Men’s Tennis Championship, Friday to Sunday, at the Wesselman Tennis Center in Evansville, Indiana. The No. 4-seeded Governors kick off the postseason with a Friday 2:00pm match against No. 5-seed Eastern Illinois.