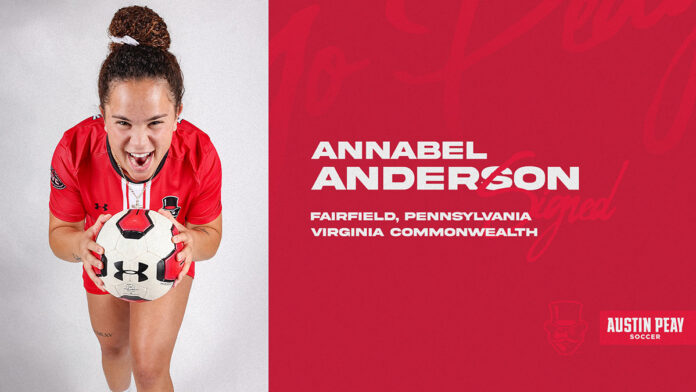 Clarksville, TN – The Austin Peay State University (APSU) head soccer coach Kim McGowan has made another addition to her inaugural roster with the signing of Virginia Commonwealth transfer Annabel Anderson.

After a pair of seasons at VCU, Anderson joins the Governors with 21 appearances and two starts in her collegiate career. During her sophomore season, the Fairfield, Pennsylvania native helped the Rams capture the Atlantic 10 Regular-Season Championship.

“Annabel is the perfect player to round out our new additions for the fall,” said McGowan. “She is a dominant presence in and around the box who knows how to score. We look forward to the immediate impact she can make in the ASUN Conference.”

A 5-7 forward, Anderson prepped at Fairfield Area High School, where she was a 2019 All-State honoree during her senior season. In four years, Anderson scored 140 goals and recorded 114 assists for the Green Knights. A three-time GametimePA All-Star, Anderson helped Fairfield win the 2016 Pennsylvania Interscholastic Athletic Association Class 1A Championship, tallying two goals in the title match as a freshman.

McGowan will lead Austin Peay State University into its first-ever season in the ASUN Conference this fall. For news and updates, follow APSU soccer (@GovsWSOC) on Twitter and Instagram or check back at LetsGoPeay.com.