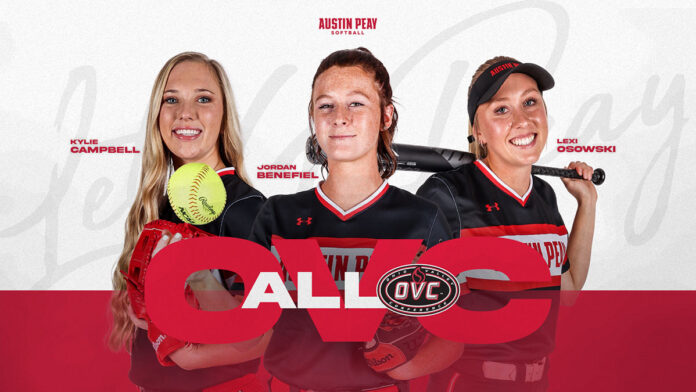 Brentwood, TN – For just the second time in program history, the Ohio Valley Conference’s top softball honor has been awarded to an Austin Peay State University (APSU) Governor, as senior third baseman Lexi Osowski was selected as the OVC’s Player of the Year, as announced Tuesday afternoon by the league office.

Among all OVC softball players, Osowski is ranked first this season in home runs, RBIs, total bases, slugging percentage, and OPS, while being second in batting average and on-base percentage.

Benefiel, from Pendleton, Indiana, earns her second-consecutive selection to the Second Team All-OVC after also being selected as the league’s Freshman of the Year last season.

This year, despite battling a hand injury, Benefiel leads APSU in wins (14), ERA (2.66), starts (25) complete games (14) and strikeouts (119), while ranking third in the OVC in wins and innings pitched, ranking fourth in strikeouts and is only one strikeout away from becoming just the fourth pitcher in program history to record 200 career strikeouts before the end of their sophomore year.


Campbell, of Ninety Six, South Carolina, continues to add to her growing legacy as a Gov, as the left-handed-hitting freshman designated player took home the league’s Player of the Week honor following her first weekend as a collegiate player and has not slowed down, batting .333 this season with six doubles, three home runs, 26 RBI and 14 runs scored to go with 17 walks.