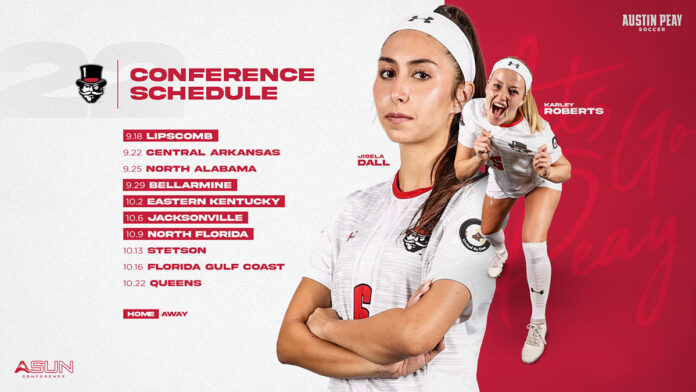 The Governors’ six-week conference slate will see them play matches against 10 of the 13 other schools in the ASUN in their inaugural season.

“There has been nothing excitement in our program as we head into the ASUN this fall,” said McGowan. “Announcing the conference schedule is the final piece we have been waiting for and we are looking forward to a high level of competitive games. We can’t wait to make our mark on the ASUN and use this national platform to showcase the great things that are happening at Austin Peay.”

Austin Peay State University will make its ASUN debut Sunday, September 15th when it hosts Lipscomb at Morgan Brothers Soccer Field. The Governors then hit the road for a pair of matches, traveling to Central Arkansas, September 22nd, and North Alabama, September 25th.

Then a season-long four-match homestand kicks off when the APSU Govs host a Thursday, September 29th match against Bellarmine and a Sunday, October 2nd match against Eastern Kentucky. The following week the Governors will welcome Jacksonville, October 6th, and North Florida, October 9th, to Clarksville.

The APSU Govs then close the regular season with three-straight road matches, starting with a trip to the Sunshine State to take on Stetson, October 13th, and Florida Gulf Coast, October 16th. The regular-season finale will take Austin Peay State University to Charlotte, North Carolina for a Sunday, October 23rd match against the ASUN’s newest member Queens.

Match times and the nonconference portion of Austin Peay State University’s 2022 soccer slate will be announced at a later date.

For news and updates as APSU soccer (@GovsWSOC) prepares for its first season in the ASUN Conference, follow along on Twitter and Instagram or check back at LetsGoPeay.com.